Skip to content
NER: Every Western country has developed so far along socialist lines that the debt burden for State pensions and healthcare is already totally unsustainable. There is no economic means to change the situation, the cumulative debts can never be paid. It is thus a logical approach to vastly reduce the number of elderly currently, and in the future, who rely on these handouts. They are handouts because the contributions paid to sustain them were never going to be sufficient for the payments due.
It is indeed unthinkable to cull these numbers, but the people in charge are by nature sociopaths, who see everything through business eyes, and are totally lacking in compassion. You can be certain, that the whole Covid scam and the vaccines following, were engineered to achieve the objective of population control.
The Unthinkable: Culling the Population To Balance the Books

By Bill Sardi with Matthew Sardi

While the public is told the preconceived COVID-19 pandemic is a calamity of unfolding proportion, that emanates from a deadly mutated virus that appears to have been “invented” in a laboratory and targets octogenarians in particular, and the proposed antidote is mandated vaccination that may have more heinous consequences than the virus itself, there is another faction that sees this catastrophe differently.  Those who know what this pandemic is really all about – insurance actuaries.

It’s about balancing the accounting books.  It is why progressive globalists tell us we need a reset – a financial reset.  It’s really all about private bankers and life insurance companies and public pension planners having to balance their accounting books.  They have to clear their ledgers of people.  Americans are living too long.  The pools of insurance money are exhausted.  The pandemic serves as a distraction.  The virus will take the blame for the planned deaths.

There is a thought in the back of many sceptical Americans’ minds that our overlords are attempting to cull the population.  The US Debt Clock lists unfunded liabilities of $21+ trillion for Social Security and another $32+ trillion of unfunded liabilities for Medicare.  The entire US economy (gross domestic product) in a year could not balance these accounts.

If you don’t believe the pandemic has been manufactured, examine the chart below.  It reveals wide differences in the frequency of tests, variance in percent of positive tests (rigging the PCR nasal swab test) to come up with lots of cases (many which they said were asymptomatic!), to produce contrived case-to-fatality rates (people were dying, but not necessarily of COVID).  The pandemic seems to worsen along political lines in the US. 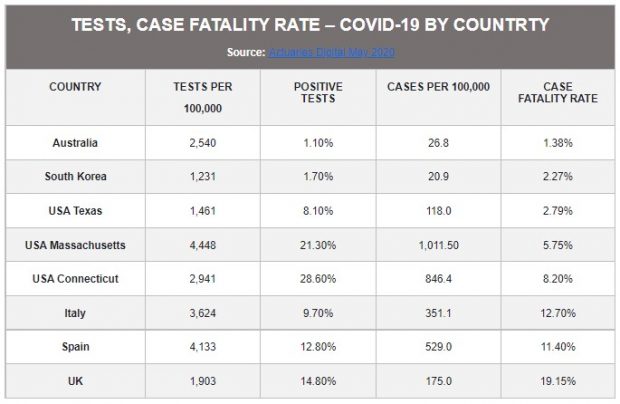 To deal with impending insolvency social planners and government overlords discuss alternatives: (a) cut back on services (ration delivery of healthcare and trim pension checks); (b) increase taxes and insurance premiums; (c) delay enrolment in these programs; (d) or the unthinkable, the unmentionable, via neglect or by intention, increase the premature die-off of retirees to save these programs from insolvency.

The idea of culling human populations is not new

Don’t think the idea of covert euthanasia to solve shortfalls in public funding is far-fetched.  I pointed out in 2013, Great Britain could not afford to care for all of its retirees and simply resorted to dehydrating its institutionalized retirees (murder without fingerprints) to remove them from being such a financial burden.

The biggest Ponzi scheme of all

One rationale for engineering lifespan so people die on time is that 13-25% of healthcare costs occur in the last six months of life.  Eliminate these fragile, aged, infirm, vulnerable, feeble-minded people and you have fixed your accounting books.  Most of the people (99.74%) dying of COVID-19 in the U.S. were institutionalized.  The virus targeted the frail elderly in nursing homes.

While that 2.5 million lost years of life number may be in dispute because of bogus PCR tests that are used to confirm cause of death, that figure can be calculated as life insurance actuaries do to come up with a guesstimation.

From an insurance actuary’s viewpoint

Here is how Social Security actuaries view the problem.  The pandemic is likely to increase unemployment and reduce payroll deductions which serve as revenue to the Social Security OASDI Trust Fund.  Under one scenario insurance actuaries plotted that 362,000 older Americans would prematurely succumb to the COVID-19 virus.  That is out of an estimated 1.4 million aged Americans that reside in nursing homes.

The actuaries refer to this population of institutionalized Americans as “older people who would have died from other causes over the next several years.”  In other words, they were going to die soon anyway.  These premature deaths, induced by the virus (or maybe even the vaccines) would represent ~25% of the nursing home population in the US.

“However, unlike in most economic recessions, the potential effects from increased Social Security benefit applications will be partially offset by increased deaths among our beneficiaries due to the pandemic.”

Another unmeasurable but powerful factor is fear.  Governments weaponized fear.  The fearmongering by the news media suggests collaboration in a covert agenda to cull the population.  To do that, deaths are needed to spread fear.  Fear spreads faster than any infectious disease.

By coding many normal deaths as COVID-19 via the notorious PCR (polymerase chain reaction) test, with false positives of 40% to 97% (hospitals having financial incentive to do so), mortality figures ran artificially high.

As fear of a mortal infectious disease spread that no one had immunity against, the masses feared going to the hospital, believing healthcare workers would transmit the infection to them.

By Spring of 2020 Medicare claims for outpatient Medicare fee-for-service claims dropped by 51%.  However, the pandemic brought increased unemployment and reduced payroll deductions for future Medicare.  So simultaneously there were increased savings and reduced revenues.

The public wasn’t being told that the Medicare Trust Fund was projected to be exhausted by 2024.  As originally drafted in 1965, insurance actuaries had predicted Medicare would be insolvent by 1999, but legislation prolonged its death.

Now the gas tank is empty.  Modern societies are unable to live up to their social contract to provide pensions and healthcare to their burgeoning population of retirees.

Almost 25% of American adults now live to age 90 and beyond.  This has given rise to a phenomenon called LONGEVITY RISK, the chance that survival rates will exceed pricing assumptions, in other words, that Americans will outlive their Social Security. Longevity risk is the danger that you will outlive your money. Americans are living 20+ years beyond their traditional age of retirement – 65 years.

With so many Americans unemployed (official unemployed is 9 million; unofficial 16 million unemployed; actual is ~40 million).  Others are given incentive not to go to work via provision of unemployment/stimulus checks, thus accelerating the depletion of pension funds because no FICA deductions are taken from the stimulus checks.

Insurance actuaries from 27 different life insurance companies churned their data on 2.5 million death claims occurring in the first half of 2020 and compared them to prior years in regard to excess deaths.  Regardless of any argument over the validity of cause of death, 6.7% of death claims were due to COVID-19.  There was no significant rise in death claims in the first year of the COVID-19 pandemic.  The average age at death was 79.5 for COVID-19 deaths and 78.9 for non-COVID-19 deaths.

The results of an actuarial insurance claim survey (shown below) reveals there was only a modest rise in death claims in 2020.

Another survey reveals death insurance claims for COVID-19 did not comprise more than ~5.0% of all death claims.

The COVID-19 crisis cost 16 global multiline insurers about $8 billion in 2020 although they still reported $36 billion of net profit.  Source: Insurance Journal May 28, 2021.  The many reported deaths may have been a result of lockdown measures rather than the virus.

Lack Of Revenues Is The Primary Problem

A revelation is that depletion of the Old Age, Survivors, and Disability Insurance Tax (Social Security) trust fund is driven almost entirely by lower revenues, not excessive numbers of enrolees or deaths (see chart).

The Social Security Trust Fund needs to put reserves in investments that produce profits.  Because of inflation, these funds cannot lie stagnant over the years, waiting for Americans to enter retirement and tap into their Social Security.  So, these SS funds are loaned out and replaced by prioritized Federal Reserve Notes (IOUs).  Then Social Security, if you can imagine, draws interest on these IOUs.

How can anybody take an IOU (called a government security) and draw interest on it when it is nothing more than a figment of imagination in the federal government’s mind?  Essentially the OASDI Social Security and Medicare Trust Funds hold nothing more than pieces of paper and rely on freshly collected FICA payroll deductions to stay afloat.

From May through August 2020 withholding tax receipts plunged 8.4% below the prior year’s levels.  Also 2.5 million fewer Americans age 55 or older had jobs in September than in February of 2020.  The employment rates of Americans age 62 or older plummeted as well, resulting in more Americans seeking early retirement and Social Security benefits.  Disability claims also rose.

The public is largely oblivious to this ruse.  Trillion-dollar bailout and stimulus legislation are reported by the news media, but not the precarious state of financial affairs overall.  Flooding an economy with money generally ends up raising prices.  Gasoline is above $4/gallon.  Lumber is egregiously expensive.  Shortages of meat and computer components are already being rigged.  The objective is to drive the country into insolvency to the point where paper money is nearly worthless and the masses beg for digital currency.

Then government will issue a guaranteed basic income in exchange for freedoms.  The reset will be complete.  Most Americans haven’t a clue that their private enterprise, free market, private property, Constitutionally-protected right to life, liberty and the pursuit of happiness, will only be in the past tense.  In the name of equity, Americans will all be poor.

It was Winston Churchill who said:

Five years from now fearful Americans will still be wearing face masks when riding in cars.  According to the agenda laid out by the World Economic Forum that is driving these social, political and financial changes, no one will own anything.  Vehicles will be rented on a trip basis.  No one will own cars or homes or businesses.  There will be no wealth, only stipends for survival.  The new automobile lots are already empty, said to be due to a shortage of computer chips as new vehicle production winds down.  It will be the end of America as we know it unless the mindless and naïve public comes to its senses and fights for freedom and liberty.  The US will no longer be the greatest country in the world.  And, to hell with any idea of an anti-aging pill.  You had still better die on time. 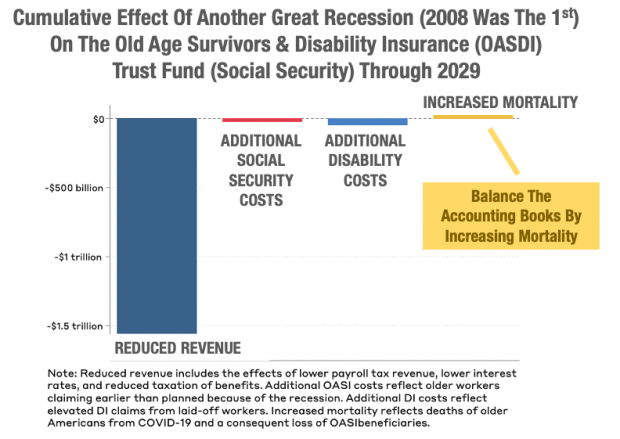 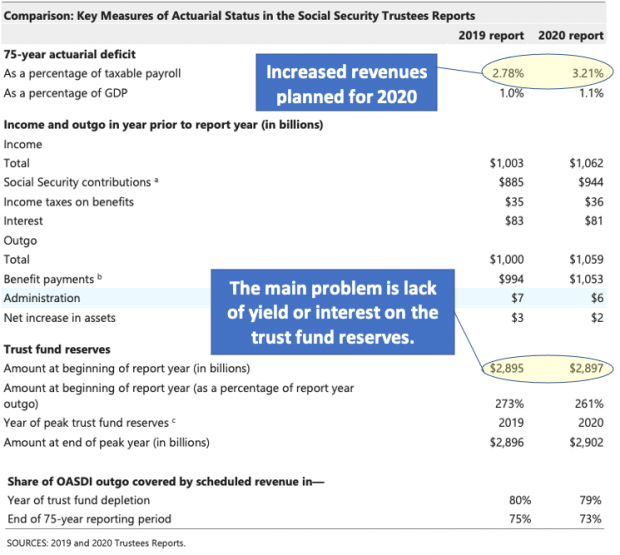 Copyright © Bill Sardi, writing from La Verne, California. This article has been written exclusively for www.LewRockwell.com and other parties who wish to refer to it should link rather than post at other URLs.

2 thoughts on “Don’t Get Old & Dependent on State, You Are Expendable”