Rather than proving the need to sow more panic, fear, and control over people, the story from India — the source of the “Delta” variant — continues to refute every current premise of COVID fascism.

The prevailing narrative from Fauci, Walensky, and company is that Delta is more serious than anything before, and even though vaccines are even less effective against it, its spread proves the need to vaccinate even more people. Unless we do that, we must return to the very effective lockdowns and masks. In reality, India’s experience proves the opposite true; namely:

In other words, our government is learning all the wrong lessons from India, and now Israel and the U.K. Let’s unpack what we know occurred in India and now in some of the other countries experiencing a surge in cases of the Indian “Delta” variant.

The Indian Council of Medical Research (ICMR) recently conducted a fourth nationwide serological test and found that 67.6% of those over 6 years old in June and July had antibodies, including 85% of health care workers. This is a sharp increase from the 24.1% level detected during the December-January study. What we can conclude definitively is that strict mask-wearing (especially among health care workers) failed to stop the spread one bit. Yet now they have achieved herd immunity and burned out the virus with just 3% vaccination (now up to 6%) with roughly one-sixth the death rate of the U.S. and the U.K. and less than one-half that of Israel.

Immediately, naysayers will suggest that somehow India is vastly undercounting the deaths because it is a shabby third-world country. However, if we are to suggest that, it would mean that so much of the data from so many other countries we use for studies must be ignored. Also, it’s true that India is poor in some areas, but it is highly developed and has a very strong bureaucracy and administrative state throughout. There might be undercounting, but the notion that it can account for that wide a gap between India and the U.S./U.K. was always unlikely.

However, now that the Delta has spread to other countries like Israel and the U.K., we need not speculate who is right about India’s death rate. The fact that Israel and the U.K. have so many Delta cases yet so few deaths relative to the winter spread of the original strain demonstrates that Delta is likely much weaker and India’s numbers are probably close to accurate. Remember, most of India’s spread, unlike in the West, occurred with Delta, long after the ancestral strain that hit the West was gone. If it really was the bloodbath some are suggesting (a tenfold undercount of deaths, in their estimation), why is the data from the U.K. showing just the opposite?

The latest data from the U.K. show that the case fatality rate for the Delta is just 0.2%, much less than the others. And we need not speculate with generalized studies. The raw data shows that since May 1, there have been approximately 1,300 deaths in the U.K. out of roughly 1.1 million confirmed cases. But those are confirmed cases. The likely infection fatality rate is much lower because now more than ever, people are avoiding testing, and the U.K. media has been reporting for weeks that the symptoms of the Delta for most people appear more like a cold.

The Guardian reports that based on data from the app-based Zoe COVID symptom study, the symptoms being reported are mainly headaches and runny nose. “People might think they’ve just got some sort of seasonal cold, and they still go out to parties … we think this is fuelling a lot of the problem,” said Tim Spector, a professor of genetic epidemiology at King’s College London, who is leading the work on the reporting app.

The U.K. media are trying to panic people about spreading a cold, but in fact, they are reporting good news! This virus has attenuated for most people to the point that they can’t even distinguish it from a cold, much less a flu. Thus, the fact that India achieved most of its immunity throughout the spread of the Delta variant actually lends a lot of credence to the fatality rate of one-sixth of that of the U.S. and the U.K., which experienced most of its deaths from the ancestral strain.

If you look at any chart from Scotland, which is now mainly over the curve, there is a complete decoupling of deaths from cases.

It looks like the Delta wave is rolling over in Scotland, with deaths nicely contained. The UK cannot be far behind. 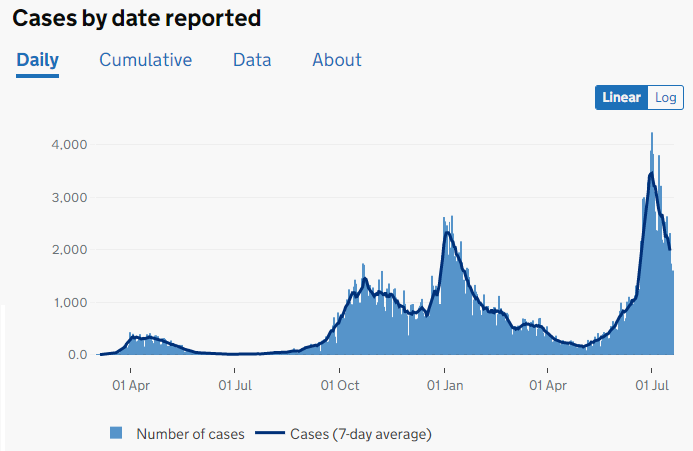 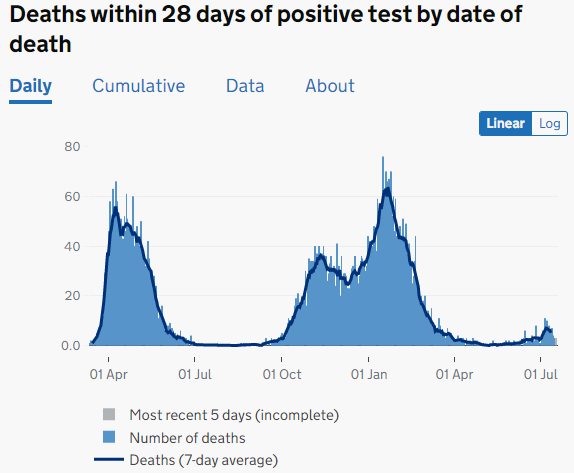 The same thing is being observed in Israel, which is slightly behind the curve. The country has had just 20 deaths so far in July, but again, 15 of them were of vaccinated individuals.

However, to the extent that there are cases, and the relatively rare serious cases, the vaccines have proven to be a bust in preventing them. The Western countries are relying on an exponentially higher vaccination rate than India with a much lower seroprevalence rate from infection. It’s simply not working. According to Israel’s Ministry of Health, the Pfizer vaccine efficacy against infection dropped 42% since the start of the inoculation drive in Israel, and efficacy against severe illness has dropped 60% among those vaccinated early on. Ditto for the United Kingdom.

Scottish data indicate those 60+yo who are vaxed are trending towards testing C19 positive & being hospitalized at equal rates, which suggests that at least this (more vulnerable) subpopulation are not being protected against more serious disease https://dailysceptic.org/2021/07/21/vaccines-not-protecting-over-60s-in-scotland-from-being-hospitalised-with-covid-19/… 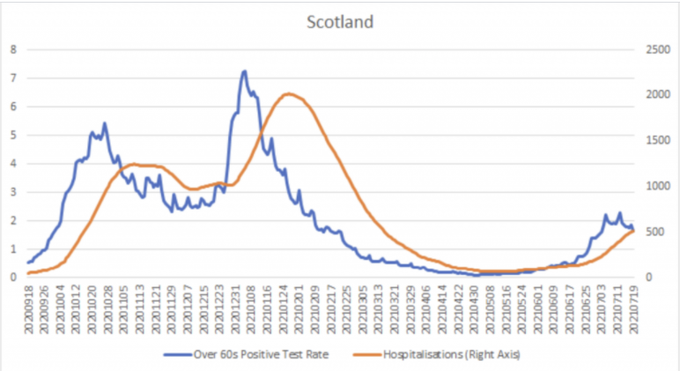 8:08 PM · Jul 21, 2021
In fact, in Israel, the case rates track almost perfectly with the percentage of those vaccinated stratified by age range.
We have more data! It is now clearer than ever: *Pfizer vaccine has completely FAILED to prevent the spread. *Hence, the “green passport” (“happy passport”) that is now being executed in Israel = completely redundant & discriminative. https://twitter.com/PishPishCat/status/1417788443531354116?s=20… https://data.gov.il/dataset/covid-19 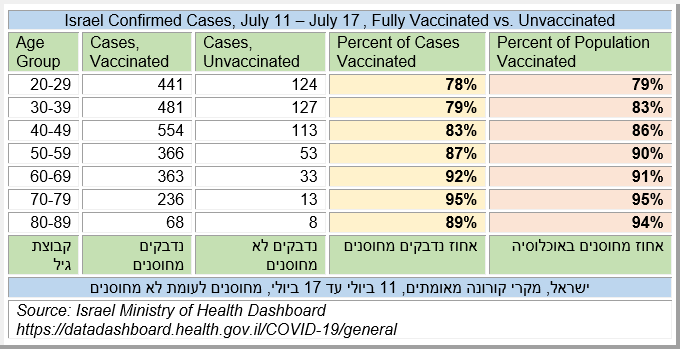 Thus, the experience from India and the Delta variant teaches us the exact opposite of what the panic-mongers are pushing. Natural immunity, not vaccination, is king. Which explains the dichotomy between India and countries like Gibraltar. In Gibraltar, nearly every adult in the tiny country has been vaccinated, yet it has the third-highest per capita rate of infection in the world.

Gibraltar fully vaccinated every eligible citizen by April. Now 2.5 months later, they have the 3rd highest per capita rate of infection on Earth, with 80% of cases in the past two days being vaccinated. Apparently, 100% vaccination does not lead to zero Covid. 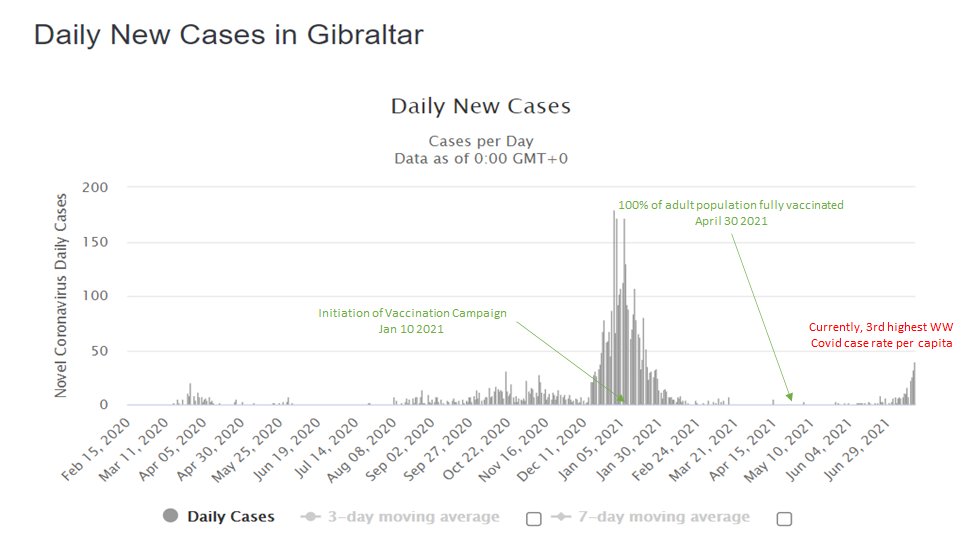 Gibraltar’s government provides vax status for all recent Covid cases. I aggregated the data for residents and have presented it below. They used 100% Pfizer As I long suspected, negative efficacy is on the table
Seroprevelance survey indicates that 70% of adults and 59% of children in India have antibodies from prior Covid infection (933 million people). Implied IFR in India is 0.04%; this also implies that any future waves in India should be muted by immunity. 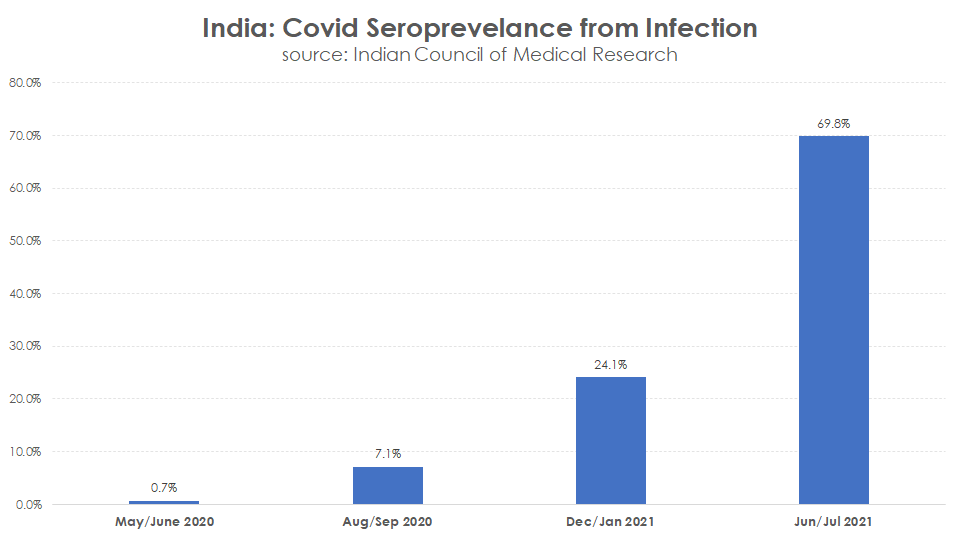 SARSCoV2 seroprevalence data confirm how India’s natural immunity subdued https://twitter.com/andrewbostom/status/1417111802664701960… the C19 Indian/delta variant: 2/3 of those aged >=6yo have antibodies, incl 85% of healthcare workers https://indianexpress.com/article/explained/explained-icmr-covid-fourth-serosurvey-findings-7413949/…
Widespread immunity also likely explains why the current wave of Delta infections rapidly declined (only 2% of the population was vaccinated when cases began to plummet, only 6% fully vaccinated currently). The vaccines appear to have come too late for India. 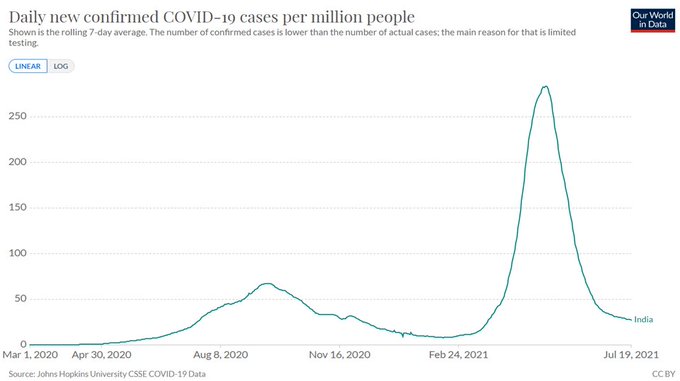 and 59% of children in India have antibodies from prior Covid infection (933 million people). Implied IFR in India is 0.04%; this also implies that any future waves in India should be muted by immunity.
Widespread immunity also likely explains why the
current wave of Delta infections rapidly declined (only 2% of the… https://t.co/RxcdhjTdHR

The same trend appears to be playing out in Cyprus:

Cyprus currently has the most Covid cases per capita on Earth yet, before the most recent wave began, they had already vaccinated the majority of their adult population: https://t.co/GHEojcsGW2 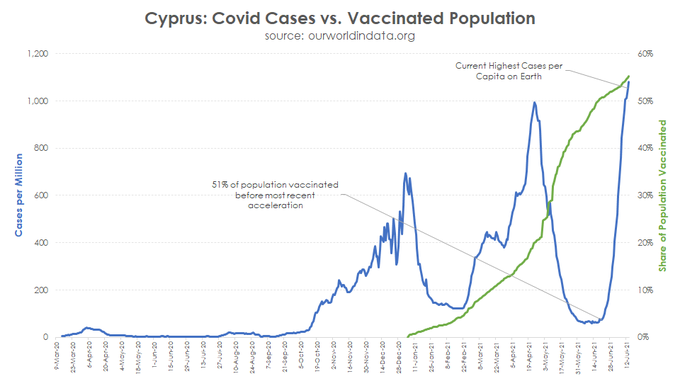 At the same time, as I chronicled last month in great detail, even within India, the states that used ivermectin to treat COVID experienced a much sharper and quicker drop in cases in May. Imagine if the Western world used ivermectin and many other treatment options pre-emptively and prescribed them at every testing station. That is how you flatten a curve.

The lesson is clear: The only way out of this is for most people to get it, and the best way to do that safely is to make sure early treatments with drugs like ivermectin are made available and to be used even preventively for vulnerable populations. If this is really about saving lives, rather than doubling down on all of the things that have failed and distorting data and history to comport with pseudo-science, they would try the one thing they have shunned until now – actually treating the virus before people have trouble breathing.

CDC Director Rochelle Walensky is correct when she says, “Nearly every death, especially among adults, due to Covid-19 is at this point entirely preventable.” But the data and learned experience show that it’s not because of a lack of vaccines, but a lack of treatment.