Dutch Journalist: ‘We are here, in Donbass, to awaken Westerners deluded by propaganda’ 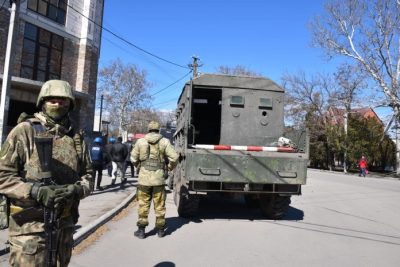 There are only a handful of Western journalists on the ground in Donbass, while the Western mainstream press is rubber-stamping fake news about the Ukrainian crisis using the same templates it previously exploited in Iraq, Libya and Syria, says Dutch independent journalist Sonja van den Ende.

Sonja van den Ende, an independent journalist from Rotterdam, Netherlands, went to the Donetsk and Lugansk People’s Republics as an embedded reporter with the Russian army to see how the special operation is unfolding with her own eyes.

The sound of shelling and explosion does not frighten her: she’s gotten used to it. Seven years ago, van den Ende worked in Syria, months before the Russians stepped in at the request of Syrian President Bashar al-Assad and changed the tide. The parallels between the Western mainstream press’ coverage of the Syrian and the Ukrainian conflicts are striking, according to her.

“They lie continuously about everything just to implement their own agenda,” van den Ende. “Like in Syria, President Assad was ‘the murderer’ and now President Putin is ‘the butcher.’ They had used this script for many years in Iraq, Venezuela and [other] countries which don’t comply with their agenda; they need a bad “guy”. But they (media) are not even there on the ground, they can’t judge. Only a handful of journalists from the West are here: Graham Philips, Patrick Lancaster, Anne-Laure Bonnel and me.”

However, this is not the only parallel, according to the Dutch journalist. She has drawn attention to Kiev’s fake reports and “false flag” operations including the Snake Island hoax, hype over Russia’s alleged “attack” on the Zaporozhye Nuclear Power Plant (NPP), the now-debunked story of Russia’s “strike” on a Mariupol hospital, and the most recent Bucha provocation, to name but a few. Van den Ende says that it resembles nothing so much as jihadists’ false flags and the White Helmet’s staged “gas attacks”. She specifically recalls the 4 April 2017 chemical provocation in Khan Sheikhun, Idlib, which was debunked by investigative reporters including Pulitzer-Prize winning journalist Seymour Hersh.

“The withdrawal from Kiev is Russian escalation. It’s the…transformation from a psychological operation to a textbook war”

“The same happened in Bucha,” says the Dutch journalist. “Many witnesses are saying that the Russian army left on 30 March. Even the Ukrainian military who came in on 1 April didn’t report about corpses on the streets. This happened on 3 April, according to the Western media. Also, evidence is saying that the bodies had white armbands, the sign of the Russian army, the soldiers wear them. So the soldiers are killing the Russian Ukrainians? No way.”

Ukrainian Neo-Nazism is No Myth

Van den Ende talked to many Ukrainian civilians while travelling across Donbass. According to her, nearly everyone condemned the Kiev government for prohibiting the Russian language and depriving them of many cultural and domestic human rights.

“The majority of the people whom I spoke with were very happy that the [Russian special] operation has started,” the Dutch journalist says. “Of course, nobody wants violence and war, but they have been suffering already eight years from the war, carnage and destruction by the Ukrainian forces. The worst were the Nazi battalions, who were fighting along with the regular army.”

Ukrainian neo-Nazism is not a myth, emphasises van den Ende. When she visited the Ukrainian port city of Odessa in 2016 and 2017 she noticed the fascist sentiment which has been spreading across the nation for quite a while. Actually, Ukrainian Nazism has been there since the Second World War, says the Dutch journalist.

The ideological successors of Stepan Bandera, the Organisation of Ukrainian Nationalists (OUN), the 14th SS-Volunteer Division “Galicia,” and the Nachtigall Battalion went underground during the Soviet period. However, after many years these forces are alive again with the US, the UK and EU using them to destabilise Ukraine, she says. Previously, these Western geopolitical actors much in the same vein used Islamists to unseat Assad, adds the journalist.

According to van den Ende, after carrying out a 2014 coup d’etat in Ukraine, the minority of neo-Nazis grabbed power and have been terrorising mainly the eastern part of the country using very vicious and cruel Nazi-style methods for eight years.

The West is continuously trying to blame Russia for all the damage inflicted on Ukrainian villages and towns. However, Eastern Ukrainian eye-witnesses say that most of destruction in the civilian areas was caused by the retreating Ukrainian army and neo-Nazi formations, including the notorious Azov Battalions, according to the Dutch journalist. In addition to using civilian facilities as shields, the Ukrainian military are reported to have indiscriminately shelled the positions they left and cede to the Russian forces.

To illustrate her point, van den Ende describes the shelling of a hospital in Volnovakha, in the Donetsk People’s Republic. The building was not bombed from the air, but attacked with grenades and rockets, she says, citing a Volnovakha resident.

“The West claims it was bombed by the Russians, but as a lady told me, that she worked there all her life, and that the Ukrainian [military] – who were quartered in the hospital – shelled and destroyed the facility and her house, which was next to the hospital.”
According to the Dutch journalist, Eastern Ukrainians are treated very well by the Russian army and regularly receive humanitarian aid in most locations. What’s more, the locals say that at long last they feel protected, she adds.

Fierce fight between the Ukrainian armed forces and neo-Nazi battalions on the one side and the Russia-backed DPR and LPR militias on the other side left many houses ruined. However, the people of Donbass have not given up, highlights the journalist.

“As a woman said: ‘We are strong, we can rebuild it, for our children and grandchildren, to have peace,’” notes van den Ende.

Is Russia Losing an Information War?

Some observers suggest that Russia is losing the information war with the West. The Western Big Media machine is working day and night with the backing of Big Tech, while most Russian news outlets have been either censored or completely silenced in the Western countries.

“No, Russia is not losing the information war completely,” argues van den Ende. “I think it’s up to us, the handful of Westerners, to awaken the majority of Westerners who are still asleep and getting bombarded with fake news and made-up stories day by day.”

One should bear in mind that this conflict is being fanned by the Western politicians in the first place, says the Dutch journalist. According to her, the West did completely the same in Syria but has largely lost that war.

The world is changing and the Western establishment has yet to reconcile itself with the emerging multipolar world order, according to van den Ende. She notes that Russian President Vladimir Putin outlined the beginning of this change in his 2007 Munich speech.

Although they opted to neglect his words at that time, it is becoming obvious that a unipolar world is gone for good, the journalist concludes.