Horowitz: The country the COVID cultists don’t want to discuss

It’s the dirty “I” word that shall not be named. And by that, I don’t mean ivermectin, but Israel.

During the lockdowns, the COVID cultists ignored the existence of Sweden as the ultimate control group on the greatest experiment on human civilization of all time. Now they don’t want to acknowledge the existence of Israel as the ultimate study group on the greatest experiment on the human body of all time.

Last September, Philip Dormitzer, the chief scientific officer at Pfizer, described Israel as “a sort of laboratory” to “see the effect” of his company’s vaccines. This was because, as he put it, Israel “immunized a very high proportion of the population very early — so it’s been a way that we can almost look ahead: What we see happening in Israel happens again in the US a couple months later.”

Well, now we have a full year of data from the most boosted country on earth and the only one to administer four doses. So what are the results? 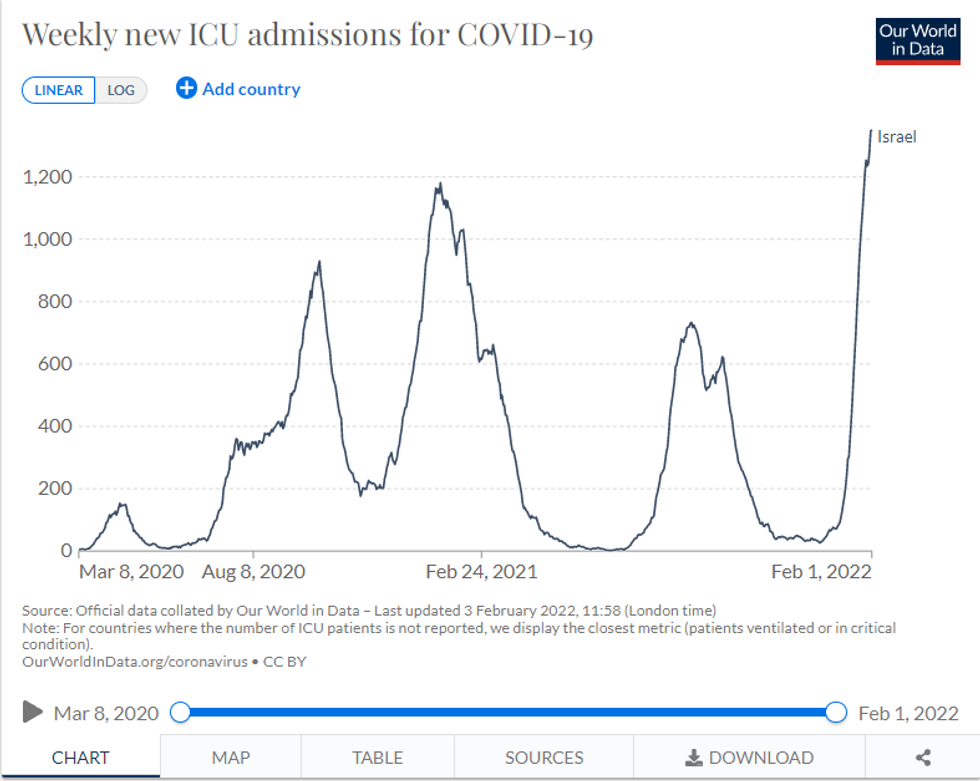 What you are looking at is not just a case rate chart. This is an ICU admission chart. And this is the daily death chart: 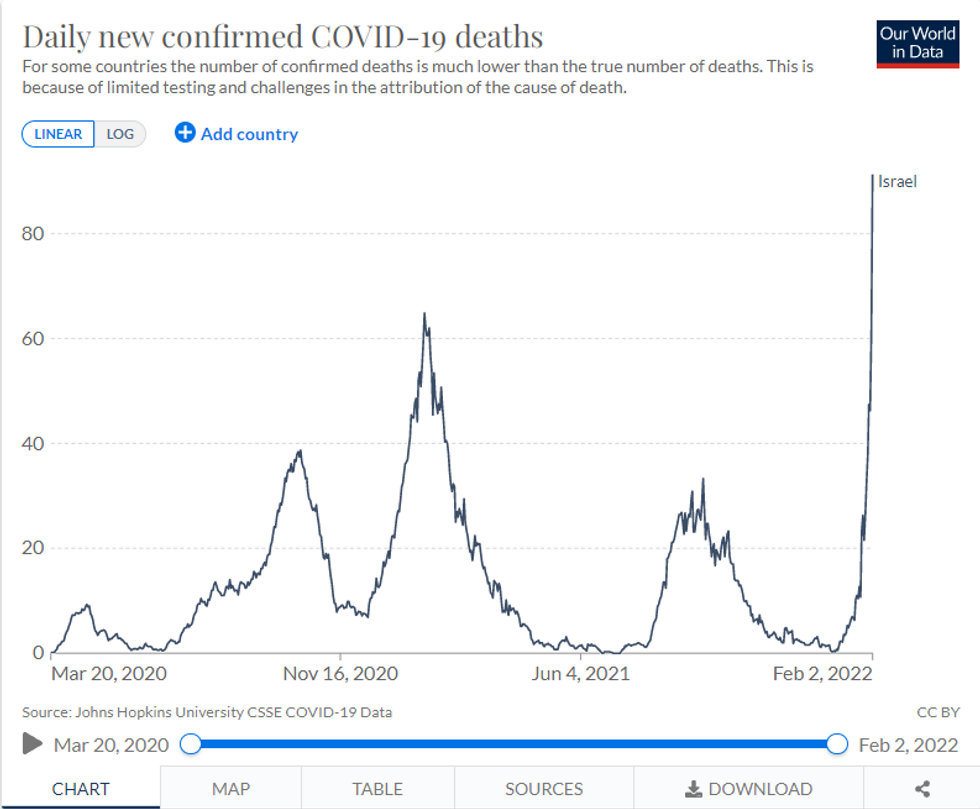 It is true that Israel, with its younger population and lower obesity rate, has fared better than many other Western countries throughout the pandemic, but why is it experiencing its own worst wave now – much worse than before any of the shots were administered?

In other words, precisely after most of Israel’s population got the third shot and even many of the seniors got fourth shots is when they experienced their worst crisis ever – not just of mild infections but serious cases. 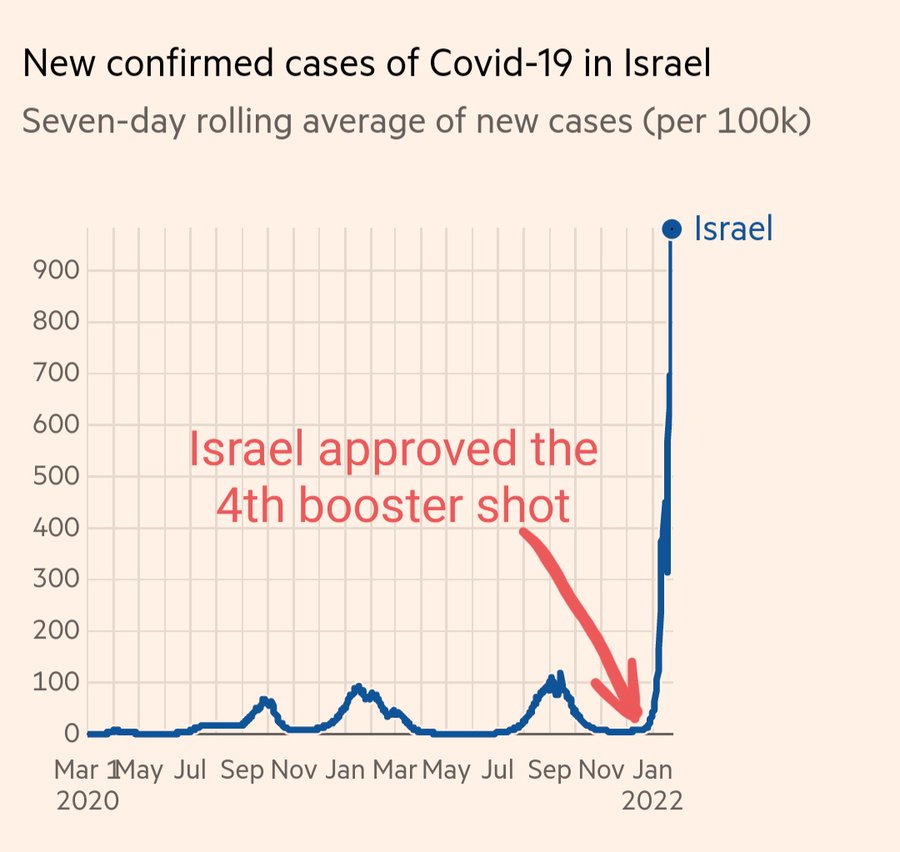 This would be disturbing enough if we were still dealing with the Delta variant, but presumably almost all the cases in Israel are from Omicron. How in the world is the most vaccinated country on earth – Pfizer’s private lab – worse off than ever before in the pandemic with the mildest variant? After all, a study from the Kaiser Permanente Southern California hospital system found that Omicron had a 74% lower ICU admission rate and a 91% lower mortality rate than Delta.

According to professor Yaakov Jerris, director of Ichilov Hospital’s coronavirus ward in Tel Aviv, “most of our severe cases are vaccinated.” “They had at least three injections,” Jerris told Channel 13 News in describing the typical COVID patient. “Between seventy and eighty percent of the serious cases are vaccinated. So, the vaccine has no significance regarding severe illness, which is why just twenty to twenty-five percent of our patients are unvaccinated.”

This explains why the vaccine is not blunting the trajectory of the wave, but could the vaccine perhaps explain why Israel appears to be getting it worse than other countries?

On the one hand, there have been a lot more overall cases of Omicron relative to the number of serious cases, but we should not be seeing these numbers of deaths and serious hospitalizations in the most vaccinated nation. Remember, this variant began in South Africa, a country with just 27% of the nation having gotten the shots, and barely any boosters in sight. Yet the country’s peak death rate per capita during the Omicron wave is about half that of Israel’s.

Covid deaths per capita in Israel are now twice the peak of the rate seen in South Africa. Which is unprecedented. Why is the relative performance deteriorating so much? 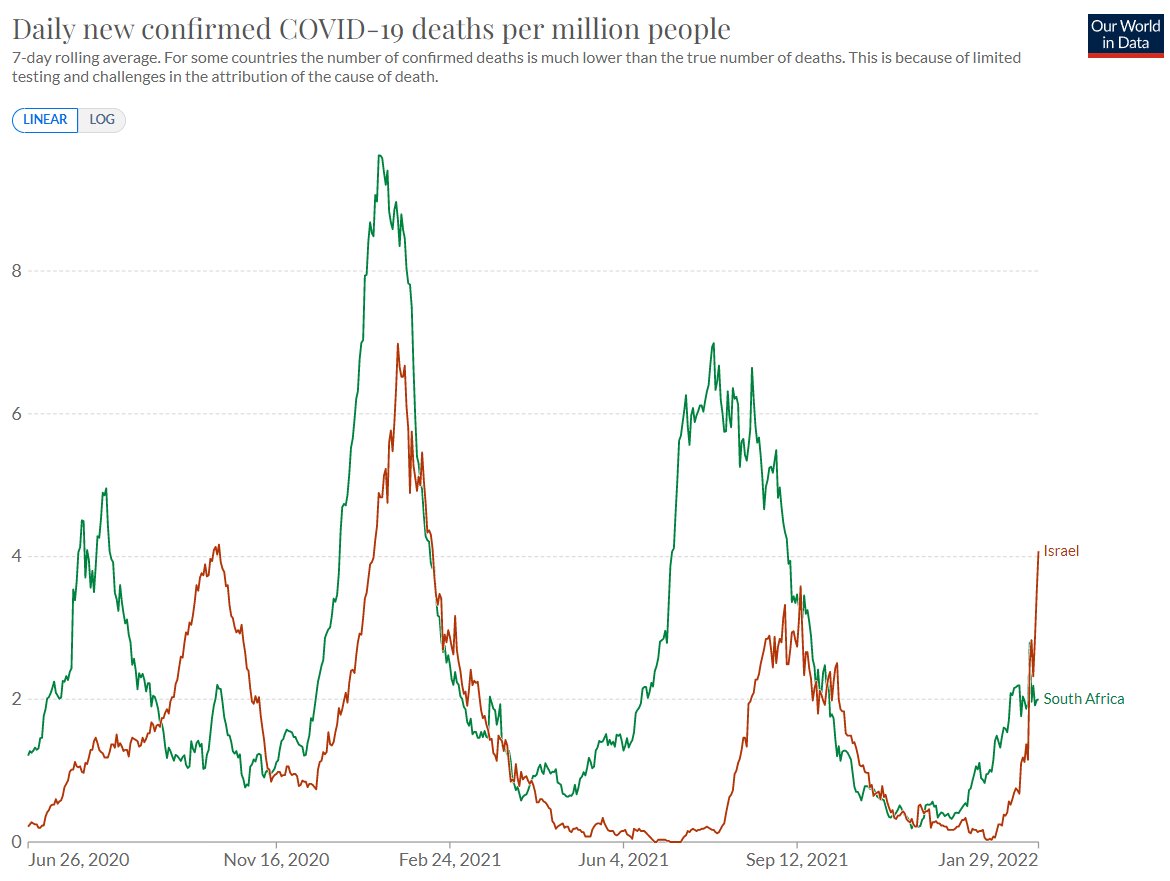 With the sky-high HIV rate in South Africa, I would sure bet that Israel is a much healthier country in general. Life expectancy in Israel is 83 (ranked #12 in the world), while in South Africa it is a morbid 65. So why is Israel having so much difficulty with what Hong Kong researchers found to be essentially an upper respiratory infection?

Is it that perhaps their problems are not despite the endless boostering but because of it? What if the problem for the vaccine is not Joe Rogan but its own track record? At this point, it’s hard to see how we are not experiencing some form of original antigenic sin, in which repeat boosters teach the body to respond improperly to a virus, particularly to one that is different from the original target of the vaccine, rendering the vaccine increasingly an off-target response to the pathogen before us.

I spoke with Dr. Dan Stock, an Indiana family physician who is an expert in functional medicine and immunology (he’s the doctor who gave a “viral” statement before a school board), to get his thoughts on why a leaky vaccine would potentially make people sicker from a respiratory virus. He explains how the sugar high of superficially high blood-based antibodies could actually harm the body’s effort to fight respiratory viruses, which tend to require more of a cytotoxic T cell response in the respiratory tract rather than generalized blood-based antibodies.

“One thing that can go wrong in a viral immune response is that to make antibodies, the immune system has to make fewer cytotoxic T cells, and therefore fight the virus less effectively. In this case, the vaccine can tell the immune system to switch from a mostly cellular immune response with T cells to a mostly humoral immune response with antibodies. Then even if the antibodies are neutralizing and the proper type (not a given with experimental vaccines), the infection will go untreated and destroy tissue. ADE (antibody dependent disease enhancement) is characterized by much higher levels of antibody production than is seen with natural infection, and a much lower Tc response. It’s this second nuance of viral immune responses that misleads many to equate great antibody responses with immunity.”

So why did the vaccines appear to be effective on some level at first, but then wane, and why would Israel have more of a problem with waning immunity? This is where booster mania comes into play.

“Whatever the immune system is taught to do the first time it sees the pathogen’s components, it memorizes that response and gets better and better at doing that with each successive exposure to the virus, even if it’s wrong,” warns Stock. “With the failed RSV vaccine in the 1960s, Marek’s disease vaccine in chickens, and these COVID-19 vaccines, immune response appeared protective at first. Then, as the body gets better and better at responding the wrong way – constantly reinforced by boosters – all hell broke loose. The vaccine is likely to teach your broken immune system to react the wrong way, you’re stuck in ADE, and won’t see it until it’s too late. The hallmark of ADE is failing immune response against all strains of the pathogen as time goes on, as we saw with RSV and Dengue, and we’re seeing with COVID-19 vaccines.”

Thus, the more the virus changes, according to Stock, not only will this particular vaccine lose its efficacy, but it will go negative because the body won’t produce as many T cells in the parts of the body that are infected. Dr. Stock co-authored a more in-depth article explaining the concerns of original antigenic sin at Trial Site News several months ago.

Is this what is going on in Israel, and will this problem spread to the rest of the vaccinated Western world? Who knows? But if Israel was supposed to be the lab, and the experiment failed, why are we continuing it in the United States?

As Pfizer’s chief scientist warned, “What we see happening in Israel happens again in the US a couple of months later.”