‘If I can keep you in a state of fear,’ executive director Doug Barry explained, ‘we can get you to do things. We can get you to move in certain ways. Essentially, we can load you onto a boxcar.’
Tue Aug 2, 2022 – 5:47 pm EDT

You’re invited! Join LifeSite in celebrating 25 years of pro-life and pro-family reporting at our anniversary Gala August 17th in Naples, Florida. Tickets and sponsorships can be purchased by clicking here.

(LifeSiteNews) — A unique new video seeks to examine the psychological, spiritual, and even biological means by which dictators, tyrants, or other rulers throughout history have gained or expanded their power over societies, often leading to violent despotism and even genocide. 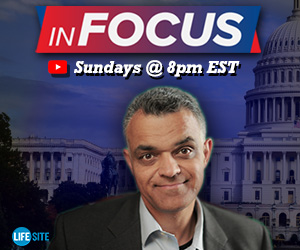 “Doomed To Repeat It” was directed by Catholic media personality, actor, and apologist Doug Barry. The founder of RADIX, who is best known for his one-man performance of the Passion of Christ, told LifeSiteNews the purpose behind the film was to raise awareness regarding “the number one” method “tyrannical, power-hungry individuals use to gain power, increase their power, and oppress people, [and that] is fear.”

And there is even a biological foundation for why persistent fear is so effective for controlling populations.

Psychologist Dr. Joe Lipetzky explains in the film two areas of the brain that provide often contradictory reactions to the same events. The prefrontal cortex is the rational area that affirms the positive with self-talk statements such as “hey, I’m smart, I’m wise, I’m learning, I’m loving, I’m helpful and I really want to care.”

Yet toward the center of the brain there is the amygdala that provides fight or flight instincts with the purpose of protecting the individual. It says things like, “Oh, my gosh, this is terrible. You’re going to reject me, you hate me, you’ll never like me again.”

Explaining how this biological dynamic can be exploited for the purpose of control, Barry said, “If I can keep you in a state of fear, this emotional fear, let your prefrontal cortex not be able to catch up and think through what your fear gland, the amygdala, is doing, we can get you to do things. We can get you to move in certain ways. Essentially, we can load you onto a boxcar.”

Mass Formation Psychosis: the first step toward totalitarianism and atrocity

The video also addresses how when such methods are used in an intense repeated fashion on a large scale, they can bring about a societal condition called “Mass Formation Psychosis,” which is defined by Dr. Peter McCullough in the video as “a mental state of irrationality, of things not making sense. And there’s a contagious nature to it.”

According to Dr. Mattias Desmet, historical analysis shows that such “mass formation” can be the first step toward totalitarianism and atrocity in the name of collective welfare.

McCullough summarizes the four steps for this process, as described by Desmet, and shows that while such parallels can be found in atrocities throughout history, these steps become quite vivid in the recent or current COVID-19 / gene-based vaccine crisis. They include:

“So when you have these four conditions — they all have to be there — there can actually be a mass formation that has taken place, and this is exactly what’s happened [with the COVID-19 phenomenon],” McCullough said.

Stress Scale: Tyrants have to ‘keep society in a certain level of stress’ to fulfill their aims

In regard to the levels of anxiety experienced across such a society, Lipetzky offered an explanation of the “Stress Scale” defining five broad categories within a measure of 0 to 100.

Normally, the first level, Healthy Focus (0-20), is “actually helpful. You’re going to do better on a test, you’re going to perform better in sports, [etc.]” explained the Boise, Idaho-based psychologist.

The second level is Tunnel Vision (20-40) where “I’m not seeing the whole picture anymore. I’m just seeing this one issue. I can still learn and I can still get new information,” Lipetzky explained.

At the third stress level, the individual experiences Disconnected Details (40-60), where they fail to see any integrated whole anymore compromising one’s capacity to reason matters through accurately. Lipetzky saw society as generally being at this level as a result of the COVID enterprise, with “all the stress from people’s jobs and health issues, and family members are beginning to respond to one another, [etc.].”

“Stress has to be able to be washed away,” Barry said. “The brain has to go through that process. [If] you keep bumping up [the stress], you get to the point where you can’t function right.”

“We’re hoping people will watch the film and look at themselves and those around them asking, ‘Where am I on this graph, on this spectrum? Am I to that point where I can’t function and make good decisions because I’m just emotionally so caught up in fear here? Or am I really taking some steps back and looking at things practically and rationally, realizing what actually might be going on here?” he asked.

Next stage: Virulent scapegoating can emerge in the context of high stress and rivalry

Desmet is quoted on screen in the film stating that the extra anxiety created by all the government COVID restrictions was given a place to be focused: “Community has been formed around a seemingly heroic struggle against a common goal. Fighting this virus has given purpose to rudderless lives.”

“The reason they buy into the narrative is because it leads to this new social bond,” he explained. “Science, logic and correctness have nothing to do with it.”

With such strong new social bonds formed, it becomes ever more dangerous to defy the narrative, he explained. “If you didn’t buy into the narrative, if you didn’t want to go along with the narrative, or if you try to say something critical about the narrative, then people indeed blamed you for showing lack of solidarity and lack of citizenship. And I think that that is extremely typical for the psychological dynamic and psychological process that I have been describing, the process of mass formation.”

Lipetzky explained that the tyrants have to “keep society in a certain level of stress” and high emotion to fulfill their aims in getting people act in ways they never would if their minds were calm. Part of this process involves differentiating and labeling the “good guys” and the “bad guys” while creating rivalry between them.

Historian and philosopher John Leake stated that within the context of such high degrees of stress and rivalry “you will see the scapegoating phenomenon emerge and become very virulent” in a society.

“An idea will catch hold and it’s very rooted in primitive emotion, anger, fear, resentment, and it starts to spread like a contagion, like an infectious disease. But it’s not a disease of the body, it’s a disease of the mind … And I think we [currently] find ourselves in an example of mass psychosis,” he said.

Groups may quickly descend into violence and authorities will rationalize the killing of resisters, Lipetzky explained, as had happened in the French Revolution.

Human rights activist and filmmaker Jason Jones warned that today’s “cancel culture is the culture of death. And the cancel culture can quickly descend into the types of horrible violence we saw in the French Revolution, the Bolshevik Revolution, that we saw in Cambodia at the Khmer Rouge. They’re influenced by the very same ideologies.”

“Antifa would bring guillotines and put them in front of people’s houses, elected officials and others,” he said. During the blood bath of the French Revolution, “they would call the guillotine holy, the holy guillotine.”

The film examines all these conditions and outcomes in events throughout history with a particular focus on Fidel Castro’s communist takeover of Cuba and the testimony of eyewitnesses Lala Suarez Mooney and Carlos Rubio.

How do we respond? ‘We need to get very, very connected to God again. We need a revival’

“What do we do?” Barry askes in the film, “Whatever each one of us can do … This takes effort on our part. If you have the ability to stand up for what is true, for freedom, then you have the right, obligation, and the duty to do so.”

Jones added, “We’re going to have to learn how to stand up for ourselves. And I say, you’re not going to make a scapegoat out of me. Right? I will stand with the scapegoat and suffer with them, but if you come to scapegoat me, you’ve got a battle on your hands.”

“Now is the time to be bold and ferocious, [and] have enormous backbone,” McCullough said.

After extensive sharing of her experience surviving Castro’s despotic takeover of Cuba, in which he immediately targeted the Catholic Church in 1959, Mooney implored, “Cuba is suffering. I’m pleading with you, don’t let this happen to America. Stand up for your freedoms, your freedom of religion … Please, do something. Don’t let this happen to this country. Stand up for your principles. Fight for them. Let everybody know what is right and what is wrong.”

Fr. Richard Heilman from the Diocese of Madison, who is also interviewed in the film, asked, “What’s the prescription to get us back to a culture that’s strong” which can resist tyrants? “We need to get very, very connected to God again. We need a revival, we truly do.”

Full Text: Global totalitarianism is a bigger threat than the coronavirus itself: mRNA inventor Malone

‘Intimidate and overwhelm’: The global predators behind the COVID ‘reign of terror’

DOCUMENTING EARTH CHANGES DURING THE NEXT GRAND SOLAR MINIMUM EXTREME WEATHER [A FEW OF THE] SCIENTISTS WHO WARN OF A COMING GRAND SOLAR MINIMUM AND LITTLE ICE AGE AUGUST 6, 2022 CAP ALLON There are many reputable scientists out there combating the orchestrated...