More Adverse Events Every Week, Still People Want More Vax
NER: I believe it is of the utmost importance to remember, when viewing any official death or injury report, that there is a significant underreporting involved. A three year Harvard study determined that <1% of events are reported to VAERS. I have explained the reasons before, and I posted a video from a nurse responsible for the VAERS reports, explaining that the onerous process involved meant that neither her nor the doctors had time to ever report events. You should therefore choose a multiplier, which can realistically be up to 100 times. Try just 10, it’s still alarming.

FDA Grants Emergency Use of Pfizer Vaccine for Kids 5 to 11, as Reports of Injuries After COVID Vaccines Near 840,000 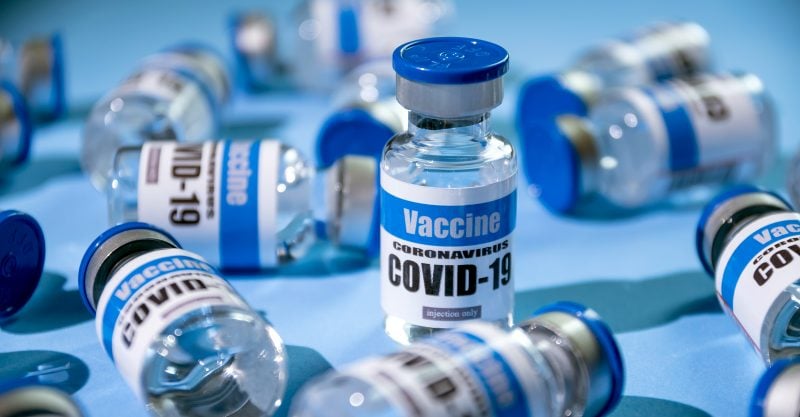 Data released Friday by the Centres for Disease Control and Prevention (CDC) showed that between Dec. 14, 2020, and Oct. 22, 2021, a total of 837,595 adverse events following COVID vaccines were reported to the Vaccine Adverse Event Reporting System (VAERS). 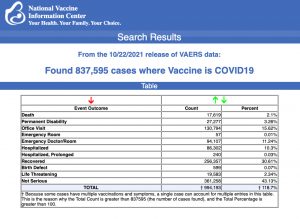 The data come directly from reports submitted to VAERS, the primary government-funded system for reporting adverse vaccine reactions in the U.S.

Every Friday, VAERS makes public all vaccine injury reports received as of a specified date, usually about a week prior to the release date. Reports submitted to VAERS require further investigation before a causal relationship can be confirmed.
Historically, VAERS has been shown to report only 1% of actual vaccine adverse events.

The most recent death involves a 12-year-old girl (VAERS I.D. 1784945) who died from a respiratory tract haemorrhage 22 days after receiving her first dose of Pfizer’s vaccine.

Another recent death includes a 15-year-old male who died six days after receiving his first dose of Pfizer’s COVID vaccine. According to his VAERS report (VAERS I.D. 1764974), the previously healthy teen complained of brief unilateral shoulder pain five days after receiving his COVID vaccine. The next day he played with two friends at a community pond, swung on a rope swing, flipped into the air, and landed in the water feet first. He surfaced, laughed and told his friends “Wow, that hurt!” He then swam toward shore underwater, as was his usual routine, but did not re-emerge.

An autopsy showed no external indication of a head injury, but there was a small subgaleal haemorrhage — a rare, but lethal bleeding disorder — over the left occiput. In addition, the boy had a mildly elevated cardiac mass, increased left ventricular wall thickness and small foci of myocardial inflammation of the lateral wall of the left ventricle with myocyte necrosis consistent with myocardial infarction.

The dose for younger children will be one-third the strength given to people 12 and older, with two shots given three weeks apart. Before the shots can be rolled out, the CDC must weigh in with its own recommendations.

During Tuesday’s meeting, the Vaccines and Related Biological Products Committee heard evidence from Pfizer and regulators, and listened to concerns raised by multiple scientists and physicians.

Based on CDC data presented during the meeting, among children 5 to <12 years of age, there have been approximately 1.8 million confirmed and reported COVID cases since the beginning of the pandemic, and only 143 COVID-related deaths in the U.S. through Oct. 14.

Pfizer provided safety data on two study cohorts of children ages 5 to 11, both of roughly equal size. The first group was followed for only about two months, the second for only two-and-a-half weeks.

Pfizer said “post-vaccination myocarditis/pericarditis” in participants 5 to <12 years of age will not be studied until after the vaccine is authorized for children.

Pfizer vaccine ‘failed any reasonable risk-benefit calculus in connection with children,’ scientist says Brian Dressen, Ph.D., is one of the scientists who testified Tuesday during the FDA advisory committee’s 8-hour hearing. Dressen is also the husband of Brianne Dressen, who in 2020 developed a severe neurological injury during the Utah-based portion of the U.S. AstraZeneca COVID vaccine.

During his 3-minute testimony, Dressen, a chemist with an extensive background in researching and assessing the degree of efficacy in new technologies, told the FDA advisory panel Pfizer’s vaccine “failed any reasonable risk-benefit calculus in connection with children.”

Dressen said the decision to authorize for 5- to 11-year-olds is being rushed and is based on “incomplete data from underpowered trials, insufficient to predict rates of severe and long-lasting adverse reactions.”

Dressen urged the committee to reject the EUA modification and direct Pfizer to perform trials that decisively demonstrate the benefits outweigh the risks for children.

Dressen’s wife was severely injured last November after receiving her first and only dose of a COVID vaccine administered during a clinical trial.

“Because study protocol requires two doses, she was dropped from the trial, and her access to the study app deleted,” Dressen said. “Her reaction is not described in the recently released clinical trial report — 266 participants are described as having an adverse event leading to discontinuation, with 56 neurological reactions tallied.”

Immunocompromised adults who received a third dose of either the Pfizer-BioNTech or Moderna COVID vaccine will become eligible for a fourth booster shot six months after receiving their third dose, according to CDC guidance issued Monday. (NER: Just remember that many true professionals have advised, that each successive shot increases your chances of adverse events occurring. Your main risk extends up to 3 years post vax, which, based on one doctors experience, could also increase your cancer risk by 20 times.)

“In such situations, people who are moderately and severely immunocompromised may receive a total of four vaccine doses,” with the fourth coming at least six months after the third, the CDC’s new guidelines said.

In August, the CDC authorized a third dose of either Pfizer-BioNTech or the Moderna mRNA vaccine — but not Johnson and Johnson’s (J&J) adenovirus vaccine — for certain immunocompromised people 18 and older.

However, a third dose is now considered part of the primary series, rather than a booster. The earliest that immunocompromised people who received a third mRNA vaccine shot can get a fourth shot as a booster would be February.

The agency said people could select that booster from any of the three COVID vaccines available in the U.S, including J&J, but specified a fourth dose of Moderna’s vaccine should be half the size of a normal dose.

Double-vaccinated can still spread the virus at home

Fully vaccinated people are catching COVID and passing it on to those they live with, warn experts in the UK. A British study published in the Lancet Oct. 29, showed individuals who have had two vaccine doses can be just as infectious as those who have not been jabbed.

Even if they are asymptomatic or have few symptoms, the chance of transmitting the virus to other unvaccinated housemates is about two in five, or 38%. This drops to one in four, or 25%, if housemates are also fully vaccinated.

“By carrying out repeated and frequent sampling from contacts of COVID-19 cases, we found that vaccinated people can contract and pass on an infection within households, including to vaccinated household members,” said Dr Anika Singanayagam, co-lead author of the study.

“Our findings provide important insights into … why the Delta variant is continuing to cause high COVID-19 case numbers around the world, even in countries with high vaccination rates.

Vaccinated contacts who tested positive for COVID on average received their shots longer ago than those who tested negative, which the authors said was evidence of waning immunity and supported the need for booster shots.

Neil Ferguson, an Imperial epidemiologist, said the transmissibility of Delta meant that it was unlikely Britain would reach herd immunity for long.

“That may happen in the next few weeks: If the epidemic’s current transmission peaks and then starts declining, we have by definition in some sense reached herd immunity, but it is not going to be a permanent thing,” Ferguson told reporters.

A case report published Oct. 25 in the Journal of Paediatric and Adolescent Gynaecology revealed a new potential novel side effect of Pfizer’s COVID vaccine that doctors say warrant further investigation.

According to the report, a 16-year-old non-sexually active female presented to the paediatric gynaecology clinic with vaginal pain six days after receiving her second dose of Pfizer’s COVID vaccine.

Within 24 hours of receiving the vaccine, the girl developed fever, fatigue, myalgias and “sores” in her vaginal area. Over the next two days, right-sided lesions in her vaginal area coalesced and became more painful. The teen went to the urgent care with a fever of 105 degrees. She was diagnosed with a Bartholin gland abscess.

Despite antibiotic therapy, her symptoms worsened and her lesions were covered in exudate with a necrotic, ring-like border. In the gynaecology clinic, the patient’s lesions were exquisitely painful, resulting in difficulty with urination, defecation and walking. She had no respiratory symptoms and no history of COVID exposure.

“Our patient had typical clinical features of aphthous ulcer, including an influenza-like prodrome and characteristic dermatologic manifestations which occurred after receiving the Pfizer COVID vaccine,” the authors wrote. According to the report, the girl’s case was submitted to VAERS “due to the temporal relationship with COVID vaccine administration.”

Children’s Health Defence asks anyone who has experienced an adverse reaction, to any vaccine, to file a report following these three steps.