NER: Sweden stood alone with neither lockdowns nor masks. Big Pharma & the Mainstream media predicted doom. Now the independent experts have been proved right & the establishment wrong.  Vanden Bossche & the many other experts vilified & penalised for speaking truth to power have been vindicated. I would predict that in time, the thousands of others standing against the corrupt Fauci establishment will also be  proven correct.

Horowitz: Sweden obliterates the lie of ‘vaccines’ as ticket to ending pandemic

It is now undeniable that in almost every part of North America, Europe, and East Asia, the pandemic is more prolific than it ever was before a single person was vaccinated, even though most of those countries have nearly every adult vaccinated. Thus, it is impossible to deny that vaccinologists like Geert Vanden Bossche and Luc Montagnier were correct when they predicted that mass vaccination with a suboptimal, non-sterilizing vaccine in middle of a pandemic would create vaccine-mediated viral enhancement. It’s hard to imagine how people who pushed this strategy didn’t see this coming.

The typical retort to this allegation is that it’s all the fault of “the Delta” and that somehow things would have been even worse without the shots. The problem with this assertion is that we are seeing the sharpest waves ever in the most vaccinated countries. Also, the fact that Sweden has never gotten a Delta wave demonstrates that natural immunity alone would have ended this pandemic.

Central and Eastern Europe are now on fire from the latest wave of the virus, which some researchers suspect is no longer Delta. Putting the variant aside, every single European country has gotten at least one wave of the virus — to varying degrees of severity — since Delta proliferated in June. The one exception is Sweden. The Scandinavian country now has the second lowest case rate in all of Europe, but more importantly, unlike Spain, which is the lowest, the Swedes never experienced a single Delta wave (as Spain did in July). 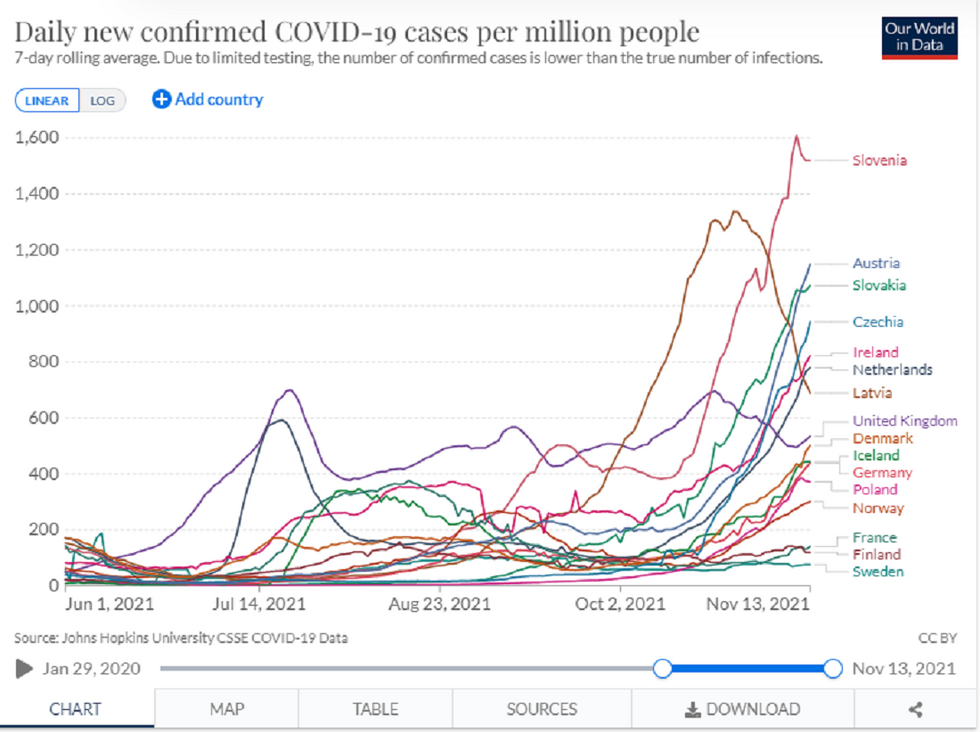 Even other Scandinavian countries like Iceland and Norway, which seemed nearly impervious to this virus until the past few months, are suffering their largest waves to date. 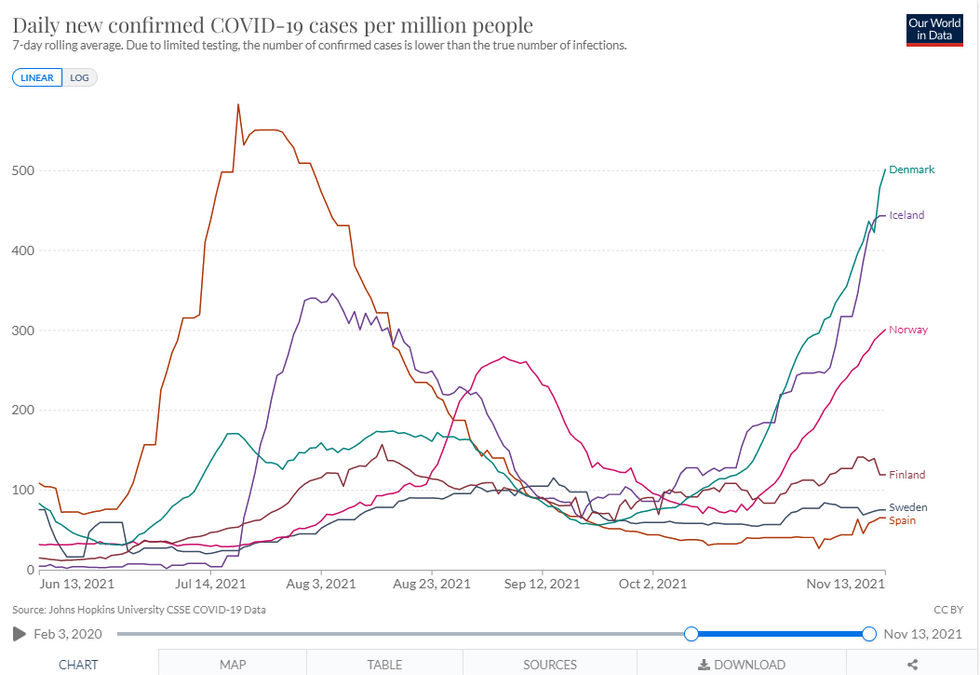 As you can see, even the Scandinavian countries or other countries that currently have low case rates all had one or two Delta waves since June – except for Sweden.

It is self-evident that Sweden’s natural immunity was able to preclude any major Delta wave — the only country in Europe to accomplish this feat. Although Sweden currently has a high vaccination rate — slightly higher than that of the U.S. — the Swedish government didn’t start its vaccination drive until much later than the U.S., U.K., and other countries that have had two Delta waves. 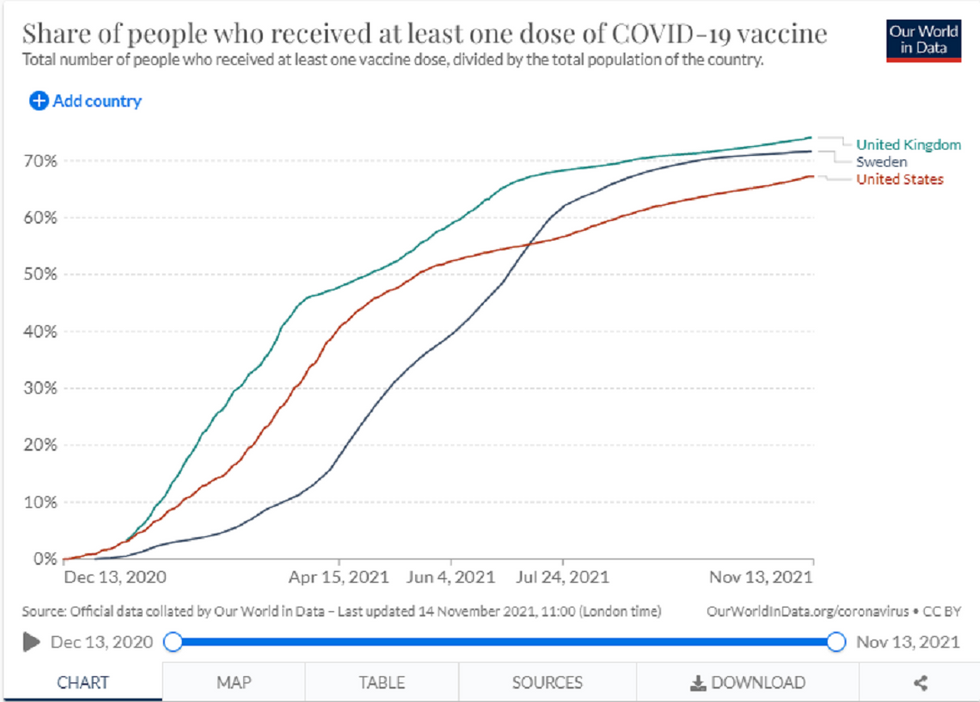 According to the narrative of the masters of the universe, Sweden should have been particularly vulnerable to Delta, while the U.K. should have coasted through it. Instead, the opposite occurred.

Let’s look at the vaccination curves of Sweden and Ireland and then compare their case rates over the past 4-5 months. 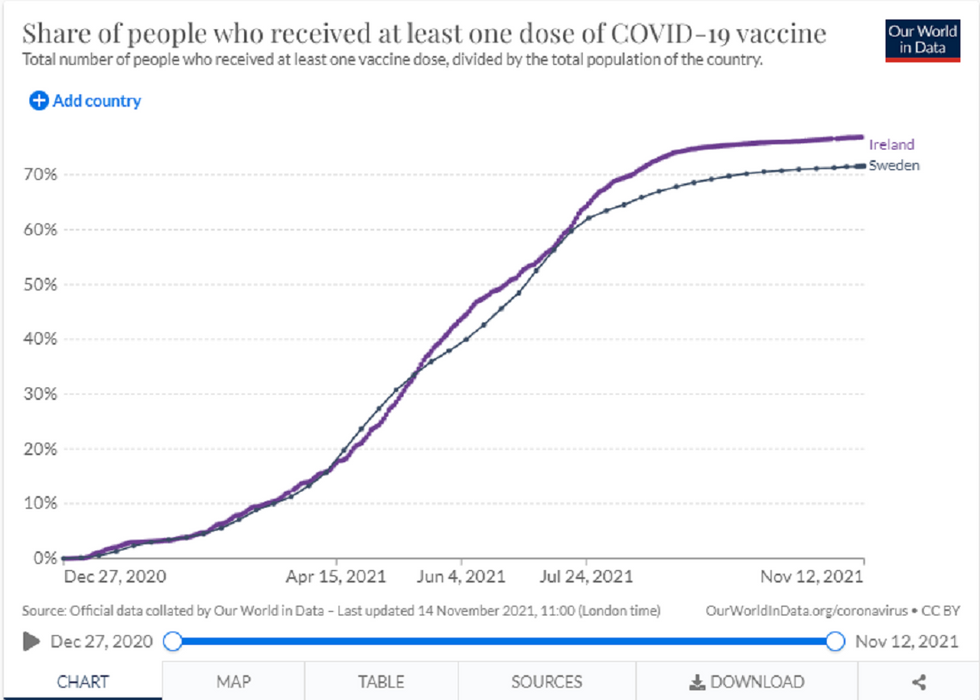 As you can see, the two countries have similar vaccination curves, but Ireland wound up jabbing an even greater percentage of its population. What are the results? 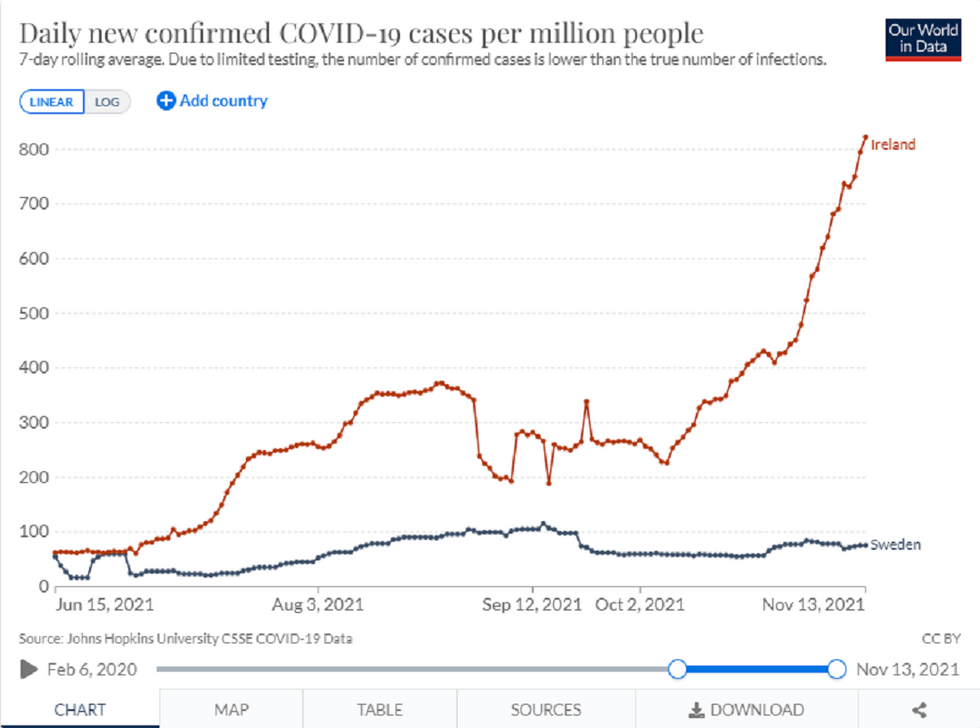 Thus, it wasn’t the vaccination success that stemmed the tide of this variant in Sweden, because Ireland should be doing even better. It’s that Sweden was lucky to have achieved herd immunity before the disastrous vaccination campaign made the pandemic worse. With most of the population likely already immune, they are not harmed by any form of vaccine-mediated viral enhancement. 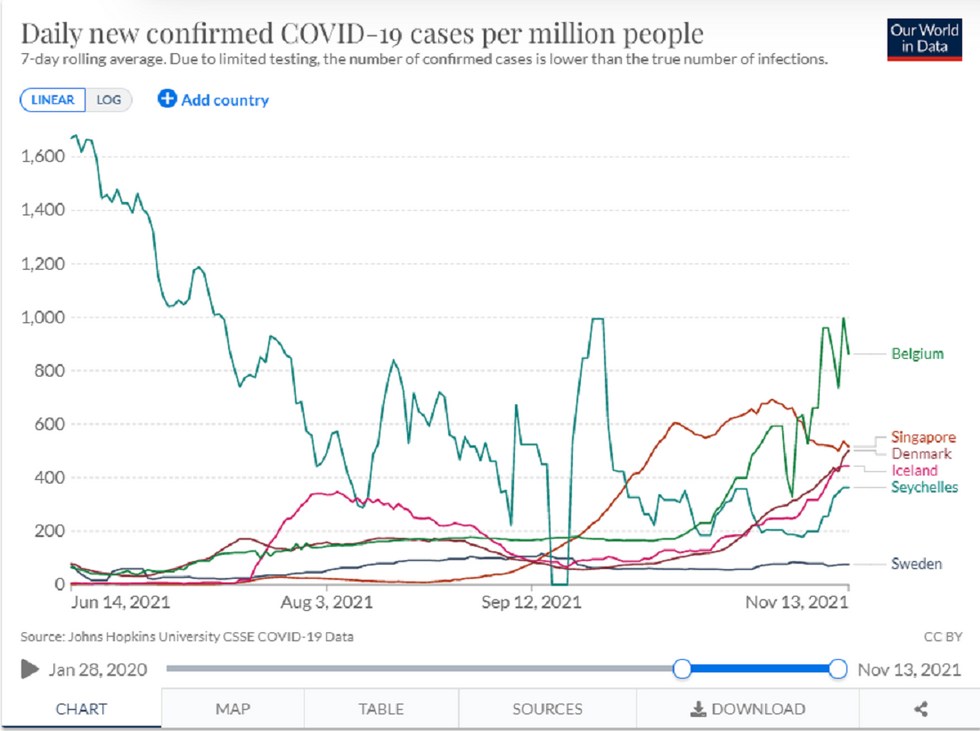 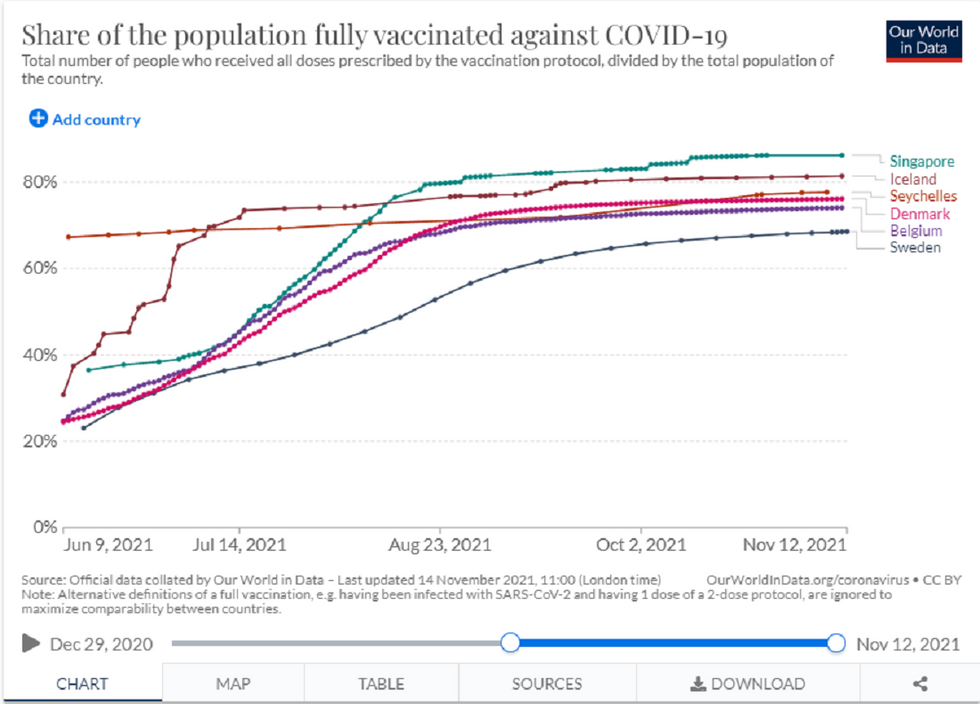 What is abundantly clear is that a vaccine that, to begin with, doesn’t stop transmission and gradually wanes is not a vaccine and, in fact, makes the virus learn to grow stronger and more durable. “Delta” was not inevitable, nor are the coming variants. Sweden could have declined to vaccinate a single person and its curve would have looked the same, because it’s clear from its contrast to every other country as a stark control group that its population’s greater natural immunity is the active ingredient responsible for the country’s success. The mass vaccination, on the other hand, is now the greatest obstacle to ending this pandemic in countries that have not achieved herd immunity through prior infection.

Let’s not forget that Sweden conducted the most comprehensive long-term study of vaccine effectiveness in the world and found that after 6-7 months, “no effectiveness could be detected” from the Pfizer shot. In fact, the study found negative efficacy after 210 days for those over 50, which harmonizes with what we are seeing before our very eyes throughout the world. For some older adults, the shots are as much as -77% effective, and the numbers seem to drop every month. 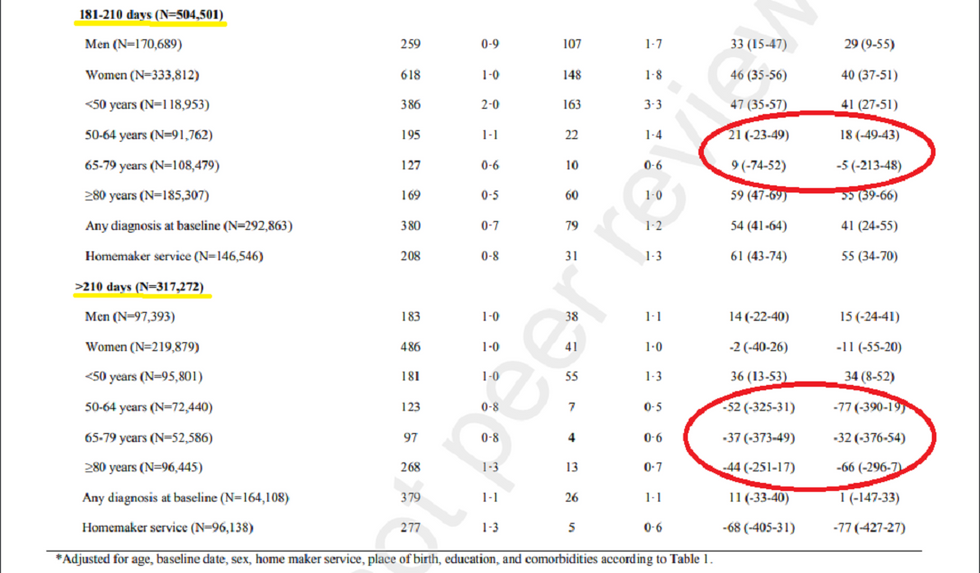 Now over 61% of the entire continent of Europe is vaccinated here in November 2021. Despite that, Europe is probably only a few days away from being the highest case rate we’ve seen at any point. Current at 375 per 1 million, reached a high of 383 in November of 2020. 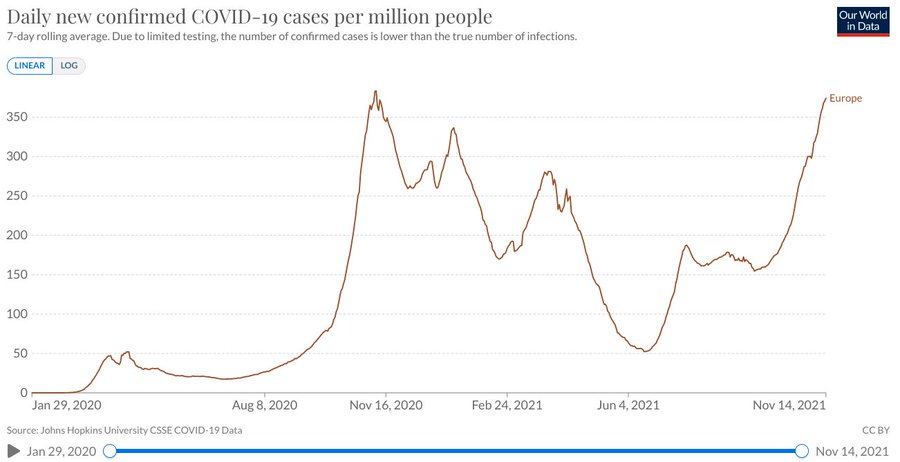