The Weak Masses Have Conformed We Must Resist

The Propaganda War (And How to Fight It)

Every totalitarian system in history has used the power of visual propaganda to generate a new “reality,” one that reifies its official ideology, remaking the world in its own paranoid image. New Normal totalitarianism is no exception. For example, take a look at this panel copied from the landing page of The Guardian — one of the global-capitalist ruling classes’ primary propaganda organs — on July 17, 2021 …

This isn’t just “biased” or “sensationalist” journalism. It is systematic official propaganda, no different than that disseminated by every other totalitarian system throughout history. Here’s the one from the following day …

Forget about the content of the articles for a moment and just take in the cumulative visual effect. Official propaganda isn’t just information, misinformation, and disinformation.

It is actually less about getting us to believe things than it is about creating an official reality, and imposing it on society by force. When you’re setting out to conjure up a new “reality,” images are extremely powerful tools, just as powerful, if not more powerful, than words. Here are a few more that you might recall … 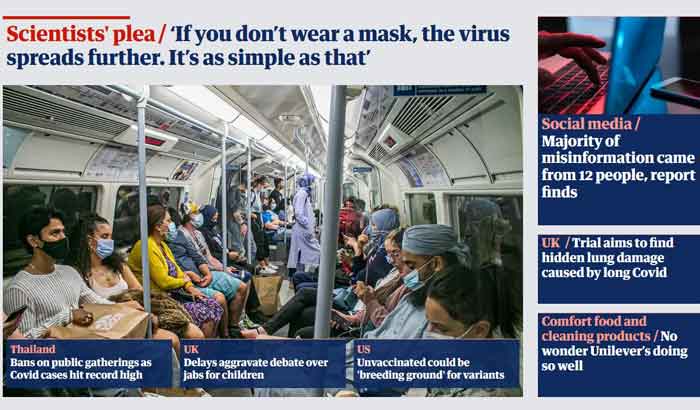 Again, the goal of this type of propaganda is not simply to deceive or terrorize the public. That is part of it, of course, but the more important part is forcing people to look at these images, over and over, hour after hour, day after day, at home, at work, on the streets, on television, on the Internet, everywhere.

This is how we create “reality.” We represent our beliefs and values to ourselves, and to each other, with images, words, rituals, and other symbols and social behaviours. Essentially, we conjure our “reality” into being like actors rehearsing and performing a play … the more we all believe it, the more convincing it is.

This is also why mandatory masks have been essential to the roll-out of the New Normal ideology. Forcing the masses to wear medical-looking masks in public was a propaganda masterstroke.

Simply put, if you can force people to dress up like they’re going to work in the infectious disease ward of a hospital every day for 17 months … presto! You’ve got yourself a new “reality” … a new, pathologized-totalitarian “reality,” a paranoid-psychotic, cult-like “reality” in which formerly semi-rational people have been reduced to nonsense-babbling lackeys who are afraid to go outside without permission from “the authorities,” and are injecting their children with experimental “vaccines.”

The sheer power of the visual image of those masks, and being forced to repeat the ritual behaviour of putting them on, has been nearly irresistible. Yes, I know that you have been resisting. So have I. But we are the minority. Denying the power of what we are up against might make you feel better, but it will get us nowhere, or, in any event, nowhere good.

The fact is, the vast majority of the public — except for people in Sweden, Florida, and assorted other officially non-existent places — have been robotically performing this theatrical ritual, and harassing those who refuse to do so, and thus collectively simulating an “apocalyptic plague.”

The New Normals — i.e., those still wearing masks outdoors, shrieking over meaningless “cases,” bullying everyone to get “vaccinated,” and collaborating with the segregation of the “Unvaccinated” — are not behaving the way they’re behaving because they are stupid.

They are behaving that way because they’re living in a new “reality” that has been created for them over the course of the last 17 months by a massive official propaganda campaign, the most extensive and effective in the history of propaganda.

In other words, to put it bluntly, we are in a propaganda war, and we’re losing. We can’t match the propaganda power of the corporate media and New Normal governments, but that doesn’t mean we can’t fight back. We can, and must, at every opportunity. Recently, readers have been asking me how to do that. So, OK, here are a few simple suggestions.

The vast majority of obedient New Normals are not fanatical totalitarians. They’re scared, and weak, so they are following orders, adjusting their minds to the new official “reality.”

When we tell them that we simply want our constitutional rights back, and to not be forced into being “vaccinated,” and censored and persecuted for expressing our views, they do not believe us. They think we’re lying. They perceive us as threats, as aggressors, as monsters, as strangers among them, who need to be dealt with … which is exactly how the authorities want them to perceive us.

We need to try to change this perception, not by complying or being “polite” to them. On the contrary, we need to become more confrontational. No, not violent. Confrontational. There is actually a difference, though the “woke” will deny it.

Same goes for the rest of CovidSpeak. COVID “cases,” “deaths,” and “vaccines” get scare quotes. Healthy people are not medical cases. If COVID didn’t kill someone, they are not a COVID death, period. “Vaccines” that do not behave like vaccines, and that are killing and crippling tens of thousands of people, and that have not been adequately tested for safety, and that are being indiscriminately forced on everyone, do not get to be called vaccines.

OK, here comes the big idea, which will only work if enough people do it. You probably won’t like it, but what the hell, here goes … 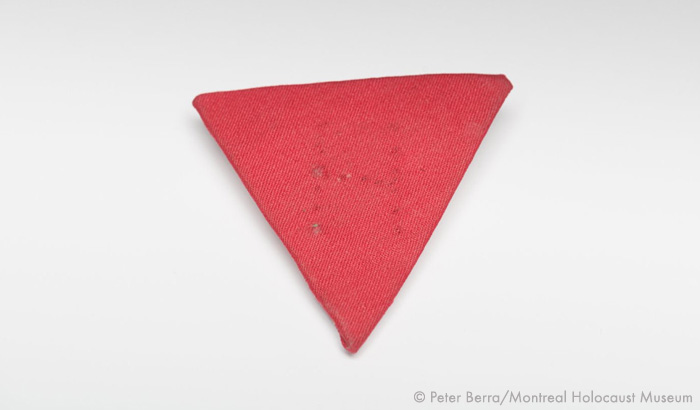 This is the red inverted triangle the Nazis used in the concentration camps to designate their political opponents and members of the anti-Nazi resistance. Make one. Make it out of fabric, paper, or whatever material you have at hand. Put a big, black “U” in the centre of it to signify “Unvaccinated.” Wear it in public, conspicuously.

When people ask you what it means and why you are wearing it in public, tell them. Encourage them to do the same, assuming they’re not New Normal segregationists, in which case … well, that will be a different conversation, but go ahead and tell them too.

That’s it. That’s the whole big idea. That, and whatever else you are already doing. The triangle is not meant to replace that. It’s just one simple way for people to express their opposition to the totalitarian, pseudo-medical segregation system that is currently being implemented … despite all that other stuff you’ve been doing, and that I have been doing, for 17 months.

All right, I can already feel your disappointment. You thought I was going to propose a frontal assault on Klaus Schwab’s secret castle, or a guerrilla naval attack on Bill Gates’ yacht. Cathartic as either of those endeavours might be, they would be (a) futile, and (b) suicidal. Frustrating as it has been for all of us, this is still a battle for hearts and minds. Essentially, it is a War on Reality (or between two “realities” if you prefer). It is being fought in people’s heads, not in the streets.

So, let me try to sell you on this red triangle thing. The point of a visual protest like this is to force the New Normals to confront a different representation of what they, and we, are. A representation that accurately reflects reality.

No, of course we are not in concentration camps — so, please, spare me the irate literalist emails — but we are being segregated, scapegoated, censored, humiliated, and otherwise abused, not for any legitimate public health reasons, but because of our political dissent, because we refuse to mindlessly follow orders and conform to their new official ideology.

The New Normals need to be forced to perceive their beliefs and actions in that context, even if only for a few fleeting moments at the mall, or in the grocery store, or wherever.

Think of it this way … as I explained above, they are basically performing a theatrical event, conjuring up a “pandemic reality” with words, actions, and pseudo-medical stage props. What we need to become is that asshole in the audience who destroys the suspension of disbelief and reminds everyone that they’re sitting in a theatre, and not in 15th Century Denmark, by loudly taking a call on his phone right in the middle of Hamlet’s soliloquy.

Look at the white people in the tweet above tormenting that girl who is just trying to go to school like any other student. The New Normals do not want to perceive themselves that way, as a pack of fanatical, hate-drunk segregationists, but that is what they are, because it is what they are doing … but it is not what most of them are by nature.

Yes, some people are congenitally sociopathic, but no one is inherently totalitarian. We are not born fascists or segregationists. We have to be programmed to be that way. That’s what the propaganda is for, not to mention all the other authoritarian conditioning we are subjected to from the time we are children.

Or that’s the gamble, or the leap of faith, behind the inverted red triangle thing. It is a basic non-violent civil-disobedience tactic, which works on people who still have a conscience and haven’t gone full totalitarian yet.

Granted, it might not work this time — we are already at the stage where they are going to imprison restaurant owners for serving the “Unvaccinated” — but it might, and what have we got to lose?