The History of Nazism in Ukraine. Who is Stepan Bandera? 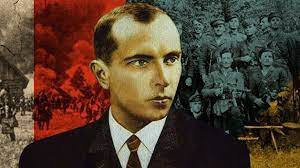 It’s a tragedy in the making. Russia’s invasion of Ukraine is reprehensible and should never have happened, but it is a fact that Russian President Vladimir Putin for several years had been warning Washington and its allies of an impending danger, that NATO expansion to its borders could lead to military confrontation.

Meanwhile, the Western media is painting a picture of Ukraine as a democracy with a president by the name of Volodymyr Zelenskyy who is a brave soul fighting for freedom and democracy, a small country against the Russian bear, a modern version of David vs. Goliath.

Russia, the bully picking on an innocent Ukraine.  But what does the world know about Ukraine?

The Western media has kept us in the Dark. Most Americans do not know about Ukraine’s politics or its history.

Do Americans, Europeans and others around the world know the truth about Ukraine and their history of Nazi ideology?

According to The Times of Israel ‘Hundreds in Ukraine attend marches celebrating Nazi SS soldiers’ reported on a Nazi celebration in 2021 in Ukraine’s city of Kyiv:

Hundreds of Ukrainians attended marches celebrating Nazi SS soldiers, including the first such event in Kyiv.  The so-called Embroidery March took place in the capital on April 28, the 78th anniversary of the establishment of the 14th Waffen Grenadier Division of the SS, also known as the 1st Galician. It was a force set up under German occupation auspices comprised of ethnic Ukrainian and German volunteers and conscripts. The marchers held banners displaying the unit’s symbol.

The Kyiv march by about 300 people was an import from the western city of Lviv, which for several years has hosted such events. A day earlier, hundreds attended a larger Embroidery March there.  Ukraine has a large minority of ethnic Russians, who oppose the glorification of Nazi collaborators. Such actions were taboo in Ukraine until the early 2000s, when nationalists demanded and obtained state recognition for collaborators as heroes for their actions against the Soviet Union, which dominated Ukraine until 1991 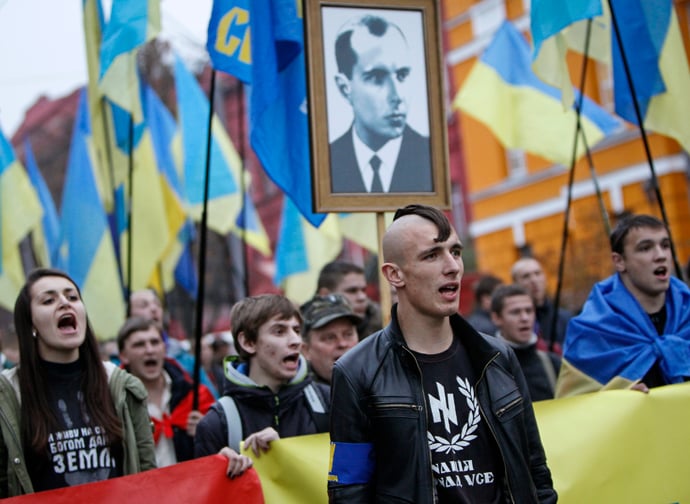 The Father of Nazi Ideology in Ukraine: Stepan Bandera

His name was Stepan Bandera, considered a Ukrainian hero who collaborated with the Nazis during World War II and who was the leader of the Organization of Ukrainian Nationalists (OUN/B), an extreme far-right organization.  Bandera was born to a Greek-Catholic family in Galicia which was part of the Austro-Hungarian empire, but later in life he became a radical Ukrainian nationalist after his country of birth had collapsed thus becoming the West Ukrainian People’s Republic, but then it became part of Poland after the Polish-Ukrainian war of 1918-1919.

In 1934, Bandera who was very angry with the new geopolitical development had organized the assassination of Poland’s Minister of the Interior, Bronislaw Pieracki.

Bandera was arrested for the crime, found guilty and sentenced to death but his conviction was later commuted to a life sentence.

In 1939, following the German–Soviet invasion of Poland also known as the September Campaign divided the country under the German-Soviet Frontier Treaty.  Soon after, Bandera was released from prison and moved to Kraków, Poland which was already occupied by the Nazis.

Bandera was convinced that working with the Nazis would allow him to establish his own government in Ukraine leading to an independent nation that would be allied with the Nazis and free from Soviet occupation.  It was well-known that the Nazis, Bandera and his lieutenants from his organization blamed Jews for establishing communism in Ukraine as a statement from Bandera at the time read that

“The Jews of the Soviet Union are the most loyal supporters of the Bolshevik Regime and the vanguard of Muscovite imperialism in the Ukraine.”

Then in June 1941, the Nazis invaded the USSR and occupied the East Galician capital of Lvov and this was where the OUN/B and the National-Socialist Greater Germany under Adolf Hitler collaborated and launched ‘pogroms’ of genocide against Jews and Poles including men, women and children of all ages over the duration of the war.

Then the relationship between the Nazis and the Bandera faction got complicated.  During the war, a declaration of independence or what is known as the Act of Restoration of the Ukrainian State was announced in homage to Bandera by his own lieutenants.

At the same time, the declaration for an independent Ukraine became a serious concern for the Nazi regime since they wanted Ukraine under their sphere of influence.  So, the alliance between the Ukrainian nationalists and the Nazis became problematic.

On September 15th, 1941, the Gestapo began to arrest its leaders including Bandera and Yaroslav Stetsko who was the prime minister of the Ukrainian National government for refusing to dismiss the Act of Renewal of Ukrainian statehood.

By January 1942, Bandera found himself in the Sachsenhausen concentration camp for high-profile political prisoners.

In 1944, the Soviets and allied forces advanced on Nazi-occupied territories, so the Nazis recruited Bandera and Stetsko to create diversions to help destroy Soviet forces who were gaining ground.

Bandera who was still the leader of the OUN/B moved to West Germany with his family and continued to work with anti-communist organizations or we can say the fascists for many years to come such as the Ukrainian Supreme Liberation Council and the Anti-Bolshevik Bloc of Nations.

In 1959, Bandera was poisoned by cyanide gas and two years later, the German judiciary claimed that the KGB was behind his assassination.  In 2022, Bandera remains a hero to the neo-Nazis in Ukraine.  The US and the European Union support Ukraine which happens to be one of the most corrupt countries in the world with proven human rights abuses that has strong ties to neo-Nazis who admire Adolf Hitler and Stepan Bandera, now if that is not hypocrisy, I don’t know what is.

The CIA and the Nazis: A Match Made in Hell

According to author and journalist Wayne Madsen in 2016 entitled: ‘CIA: Undermining and Nazifying Ukraine Since 1953’

“the recent declassification of over 3800 documents by the Central Intelligence Agency provides detailed proof that since 1953 the CIA operated two major programs intent on not only destabilizing Ukraine but Nazifying it with followers of the World War II Ukrainian Nazi leader Stepan Bandera.”

Nazism has been in existence in Ukraine for a long-time under the CIA’s Project AERODYNAMIC which was “to provide for the exploitation and expansion of the anti-Soviet Ukrainian resistance movement for cold war and hot war purposes” it included several groups including the Ukrainian Supreme Council of Liberation (UBVR) and its Ukrainian Insurgent Army (UPA), the Foreign. Representation of the Ukrainian Supreme Council of Liberation (ZPUHVR) in Western Europe and the United States, and other organizations such as OUN/B will be utilized.

We can say that for close to 70 years, the CIA’s operation of Nazifying Ukraine had been a success.

However, the earlier version of Project AERODYNAMIC was intended to destabilize Ukraine with exiled Ukrainians who were trained by the CIA operating inside Soviet-Ukrainian territories.

The CIA coordinated airdrops of communications, supplies, weapons and ammunition to its operatives inside Ukrainian territory who were trained in West Germany with the US Army’s Foreign Intelligence Political and Psychological (FI-PP) unit.  In other words, the CIA is Guilty as charged for helping cultivate the neo-Nazis or what we can call the ‘fascists’ in Ukraine in order to fight the communists. 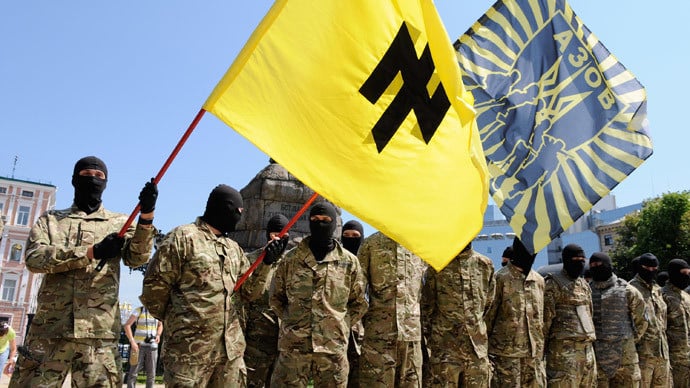 Today, far-right neo-Nazi groups are a serious problem for the Ukrainian people since many of these extremists are embedded in various levels of the Ukrainian government including members from the notorious Azov and Aidar Battalions.

Both groups were also involved in the 2014 Maidan coup that overthrew pro-Russian President Viktor Yanukovych, a coup that was backed by the US and the European Union.

Other far-right neo-Nazi groups who were also involved in the Maidan coup were the Right Sector and the Svoboda Party.  In other words, the US and its European allies have created a monster and it will only get worse for the people in Ukraine in the years to come. 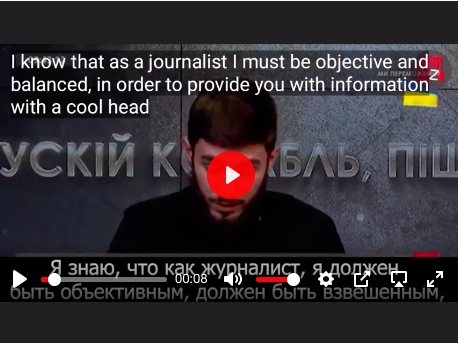 “And Given Russia calls us Nazis, Fascists anyway – I will allow myself to quote Adolf Eichmann who said that in order to destroy a nation, it is imperative to first destroy their children because if you kill parents – these children grow up and seek revenge, but if you kill children – they never grow up and the nation dies out.”

Timothy Alexander Guzman writes on his own blog site, Silent Crow News, where this article was originally published. He is a regular contributor to Global Research.

Featured image is from SCN