Horowitz: The country with the best data shows infection rates higher among the vaccinated

The idea of mandating the vaccine to protect other people is built upon a complete lie.

Whatever side of the vaccine debate you may find yourself on, it is clear that none of us predicted cases would grow exponentially a year later, when most adults are vaccinated and there is so much more built-up immunity. The evidence that cases are growing among the vaccinated is too compelling to ignore and makes the entire push for vaccination, and certainly for mandated shots, completely unmoored from reality. Isn’t it about time we start asking questions about the consequences of a leaky vaccine? 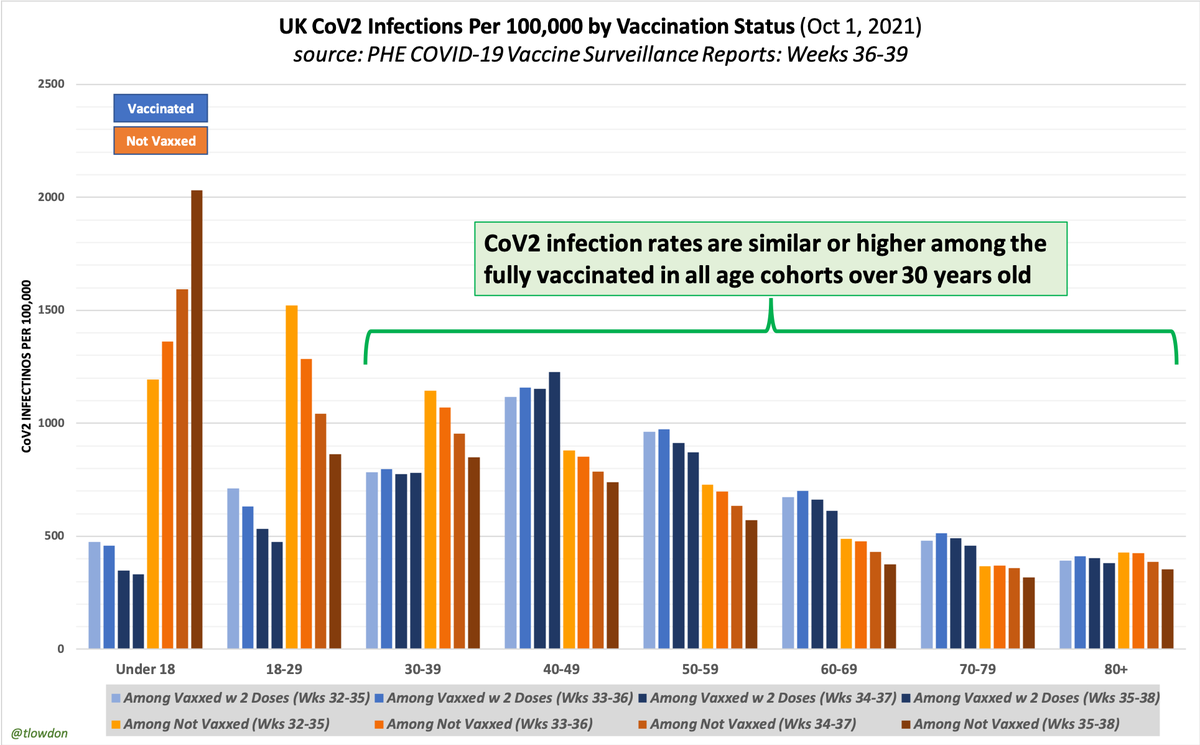 The data is from table 2 on page 14 of this past week’s surveillance report. The above chart was distilled from this data on Twitter by a friend of mine.

As you can see, the vaccinated have more cases per capita in nearly all age groups except for those under 30. The only logical explanation is that the youngest cohorts were vaccinated most recently, when there might still be some degree of efficacy from the vaccine. Which is why, even among the young cohorts, the cases among the vaccinated are higher among those vaccinated earlier. What this clearly means is that its protection wears off after a few months, especially for those who need it the most. According to the Public Health England data, for the 60s age cohort, the infection rates are now 63% higher among the vaccinated than unvaccinated, up from 53% in last week’s report.

Thus, any discussion of vaccine passports and mandates is completely contrary to reality. Not only do the vaccinated spread the virus, they might be doing so at greater levels. Whether the shots offer some protection against severe illness for a few extra months is still unclear, given that hospitalisation rates are skyrocketing among the vaccinated, but either way, that is a personal decision whether one wants to assume the risks to achieve some lighter symptoms. The notion that unvaccinated health care workers with stronger immunity from prior infection are a greater threat to patients than those without prior immunity who are vaccinated is absurd. This point is underscored by a recent outbreak of the virus in an Israeli hospital where 39 of the 42 patients, staff, and family members infected were fully vaccinated.

At this point, it is impossible to overlook the absolute failure of this vaccine to achieve its stated goal. There were dramatically more deaths this August than last August, something that makes zero sense given the high vaccination rates. The few unvaccinated people can’t be responsible for a worse outcome than when nobody was vaccinated.

With the vast majority of the vulnerable population fully vaccinated, August 2021 had just as many deaths as August 2020 – and dramatically more Covid deaths. If the vax work so well at preventing death, what explains this pattern?
Emma Woodhouse @EWoodhouse7
By request: Back to 2016 (Raw numbers from CDC WONDER. Not population-adjusted) 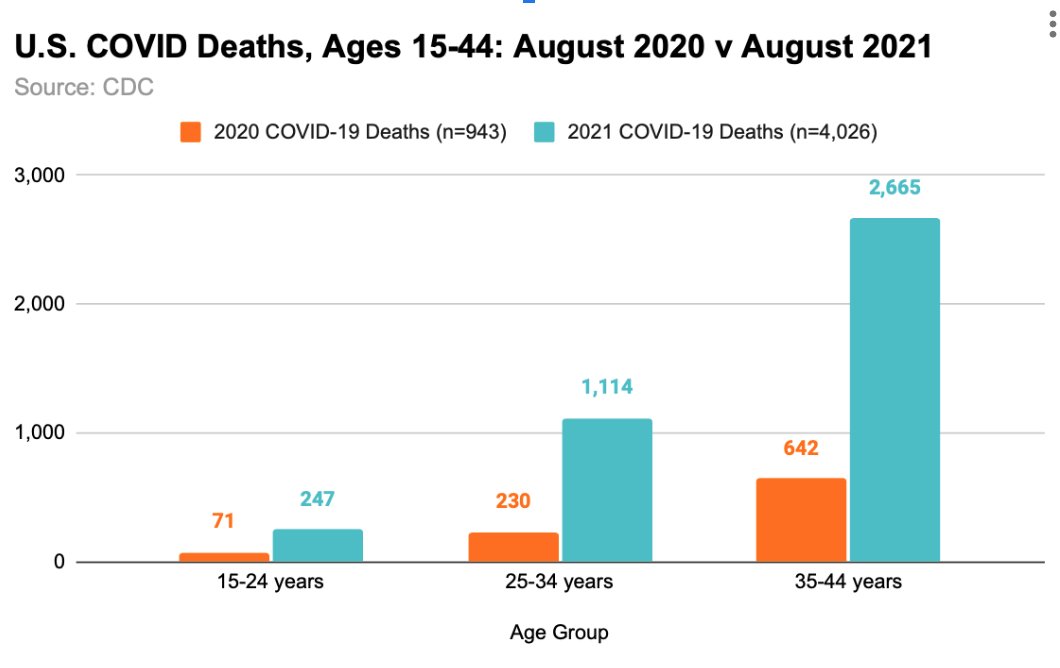 We are seeing these examples all over the world, not just here and in Israel.

With 92% of adults vaccinated, Wales is experiencing the worst outcome ever:

@ianmSC
Wales has a mask mandate and 92% of everyone over 16 is at least partially vaccinated…so why are cases the highest they’ve ever been? As always, the more masks & The Science™ fail to control COVID, the more we need them to control COVID 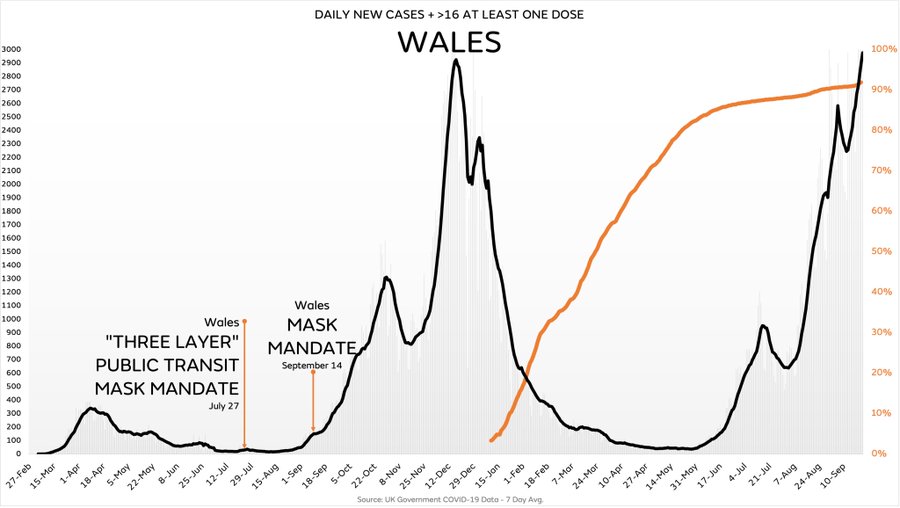 Senator Ron Johnson @SenRonJohnson
.
@POTUS says this is a pandemic of the unvaxxed. Data from England show 63% of Delta deaths in last 7.5 months were fully vaxxed. Why won’t
@CDCgov  share US data with the American people? What is the justification of mandates and refusal to recognize natural immunity?
5:20 AM · Oct 1, 2021·Twitter Media Studio
https://twitter.com/i/status/1443777704994672644
And here is ground zero for COVID fascism: Australia: How come nobody wants to inquire why things are worse now than ever and whether, perhaps, the leaky vaccine itself is the culprit?

For those unfamiliar with leaky vaccine syndrome, read this important 2015 PBS article about the leaky chicken vaccine for Marek’s disease. The article explains how a leaky chicken vaccine was able to make this devastating virus among chickens both more transmissible and more virulent, bucking the micro-evolutionary phenomenon that forces the two factors to work inversely.

In a second experiment, unvaccinated and vaccinated chickens were infected with one of the five Marek’s disease strains, and then put into a second arena with a second set of unimmunized birds, known as sentinels. In particular, the team was interested in a middle-of-the-road strain called “595” and whether it would become hotter.

The article explains how a leaky vaccine that only ameliorates symptoms for the vaccinated chickens allows the virus to become more virulent and spread more widely in live hosts. In the case of the Marek’s disease vaccine, it devastated all of the unvaccinated chickens. This is exactly what we saw in the American South around July, about six months into the vaccination program, the time when Israeli studies have shown the COVID vaccine (at least Pfizer) begins to leak. Then, as time progressed, even the protection from serious illness among the vaccinated began to wear off, which is why Big Pharma and the media are now pushing the boosters. But why is nobody asking the obvious question: Will endless boosters will continue to perpetuate a cycle of viral immune escape, as great vaccinologists like Geert Vanden Bossche warned about earlier this year?

In the 2015 PBS article, the author ominously warns that if we ever were concerned that such a leaky vaccine phenomenon would occur in human vaccines, the following question would be the first indicator: “Does the vaccine merely reduce symptoms, or does it also keep patients from getting infected and transmitting the virus?”

Well, that is exactly the way they are now selling the vaccine – that it only helps against some symptoms – and not coincidentally, the spread is worse than ever before! Take Florida, for example: With a very high senior vaccination rate, especially in places like Miami, it had a 94% increase in deaths this August over last August.

What we have been experiencing since July is exactly the nightmare of the leaky chicken vaccine for Marek’s disease. And that is one of the many reasons why we have never successfully developed a coronavirus vaccine. A 2003 experimental observation of SARS vaccine development presciently advised, “Application of a SARS vaccine is perhaps best limited to a minimal number of targeted individuals who can be monitored, as some vaccinated persons might, if infected by SARS coronavirus, become asymptomatic excretors of virus, thereby posing a risk to non-vaccinated people.”

Well, here we are today with a mass coronavirus vaccine campaign nobody in a previous generation could have imagined, and we have worse spread from the vaccinated than before the vaccination campaign. We are experiencing the exact opposite of the false premise used by pro-mandate politicians; namely, it’s the vaccinated endangering others.

Why is nobody asking the two most salient questions: 1) If the vaccine is leaking this much on transmission, why is there no concern that it is also the culprit for making the virus more virulent? 2) If it leaks this much on transmission, who is to say any degree of efficacy against serious illness, which is already waning, won’t diminish completely?

As they push booster shots, and in Israel are mandating them, this is the subtle reason for why Big Pharma and the media are now pushing their magical expensive therapeutics. Pfizer is touting a drug in development, and Merck is already requesting emergency use authorisation for molnupiravir, a drug with no safety profile.

Pfizer has been advertising a “need” for a therapeutic while Twitter promotes it as a paid ad, despite the massive conflict of interest.

Over the weekend, former FDA administrator and chief spokesman for Big Pharma Scott Gottlieb said on CNBC, “Once we start vaccinating our children, and once we have an anti-viral in hand I think society and psychology around this disease will change.” Notice he added in the anti-viral to the equation? Remember, Gottlieb is on the board of directors of Pfizer, an appalling conflict of interest none of the networks are concerned about. They are clearly signalling the demise of their own idolatry and are ready to move onto the next scam.

But why would we need therapeutics if the vaccines are not only working but are so unassailable that they must be mandated? And if they lied to us about the efficacy and safety of the vaccines and remdesivir, why would we trust them with their new therapeutics over other long-standing effective and safe off-patent drugs? Indeed, science in this era is all about $cience.