The Ukrainian War and the Insufferable Hypocrisy of Western Politicians

“Canada sending another $50 million in specialized equipment to Ukraine,” reads a recent headline.

How brave of Justin Trudeau to give Ukrainians some light weapons and then encourage them to go and battle the overwhelmingly superior Russian armies. How brave of him to ask them to die as they fight their lost cause.

How paradoxical that Justin Trudeau would extoll others to die such a heroic death.

Just a few weeks ago he himself had his opportunity to show the world something of his own courage as the peaceful Canadian truckers drove to Ottawa to protest his onerous lockdowns and vaccine mandates.

Do you remember what the brave Trudeau did?

He quickly ran away well before the truckers even reached the outskirts of his capital!

He stayed in hiding for weeks at an undisclosed location babysat by his well-armed, extensive security detail. Trudeau’s bodyguards made sure he would not come anywhere close to his own people who came to peacefully ask that he remove the oppressive and totalitarian measures with which had had tormented his nation for nearly two years.

Now this cowardly man has emerged from hiding and from the padded safety of his perch he is loudly encouraging the Ukrainian people to go and die in the hail of Russian bullets and bombs.

Could any spectacle be more pathetic?

Please note carefully what Trudeau is doing. He takes the tax money of his own citizens – the very people he oppresses so ruthlessly at home – and with that money procures weapons for the Ukrainian people so that they can be killed fighting the much superior Russian armies.

What is even worse is that this terrible crisis has been provoked by western globalists like Trudeau who had flagrantly dismissed Russia’s legitimate security concerns. As you may know, the Russians have been insisting for years that NATO in Ukraine was a red line for them. Asking that NATO not be brought to their doorstep was surely a justifiable demand, as most objective experts on geopolitics would affirm. The United States or Canada would never allow that something similar be done to them by Russia. And yet they condemn Russia for the very thing they themselves would do if the situation was reversed. 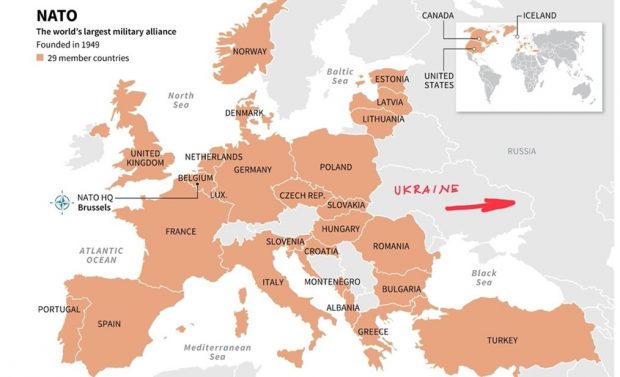 Russia’s encirclement by NATO around its western border

This is hypocrisy pure and simple. And this hypocrisy combined with the utter lack of sensitivity to the warranted pleas of a major nuclear power has led to the conflict that is now unfolding in Ukraine right before our eyes. The calamity now threatens to spill further and escalate into a nuclear confrontation between the world’s two most heavily armed nations.

When one ties to objectively inquire into the causes of this conflict it is difficult not to conclude that the fault for this tragedy lies largely with the western globalists who senselessly pushed NATO’s expansion all the way to the Russian border.

To cover up their mistakes and wrongdoing, they have quickly created the myth of a murderous madman Putin. This is obviously untrue. Putin may not be the nicest guy around, but he is certainly not mad or irrational. Quite to the contrary, what he is attempting to do is to protect his country’s security interests which have been so foolishly and haughtily dismissed by western politicians.

Putin is trying to accomplish his goal with inflicting a minimum damage in this lamentable conflict. Hence the seeming slowness of the Russian advance. The Russians are doing their best to minimize civilian casualties. They have been creating security corridors for Ukrainians to leave, which is something the Ukrainian fighters have been trying hard to prevent. Faced with the overwhelming Russian might, they need civilians to stay in place so they can use them as human shields. Putin now faces essentially the same problem we faced in Iraq where the insurgents were hiding behind civilians as we were trying to conquer their cities.

There is a revealing video from the southern Ukrainian city of Kherson which the Russians have managed to take over. In this video we can see Russian soldiers, positioned in their tanks and armored vehicles, being protested by the Khersonians. The protestors wave Ukrainian flags, film the scenes with their iPhones and freely curse the Russian soldiers into their faces while walking amidst Russian weapons and equipment.

At one point there are some shots being heard in the background, but it appears they were fired by insurgents either into the air or at the Russian soldiers as the protesters do not appear to be at all concerned and continue their march all the while hurling insults at the occupying Russians.

One can be sure that the Canadian truckers only wish they were extended the same courtesy by Trudeau when they came to ask for relief from his tyrannous lockdowns and mandates. But instead of acknowledging their just demands, Trudeau kept heaping abuse at them calling them “terrorists” while likening them to Nazis and racists. He even accused them of the most despicable crime of being “misogynists.” (It is truly difficult to see where that one came from.)

As if this was not enough, Trudeau took the Truckers’ money and promised to prosecute everyone who had contributed to their cause. And then he sent the roughs from his security services to trample on and beat up the peaceful protesters.

Now this cowardly and hypocritical man tells us that it is Vladimir Putin who somehow threatens our rights and democracy. Unlike our own leaders, Vladimir Putin has not taken away any of our civil liberties or freedoms. He has not locked us down, he has not ordered us to wear masks, he has not restricted our right to speak or travel or forced us to take ineffective and dangerous injections against our will. Putin has not ordered us to stay away from our business, school or street. Neither he has given any reason to believe that he intends to do so. Our leaders, on the other hand, have done all of those things to us and more. As far as Putin is concerned, there is every indication that he only wants to keep his country safe from the western globalists who wish to take him out, place a puppet in his place and plunder Russia’s great natural wealth via their multinationals as they have done in other places.

Having provoked Putin into taking rash action, they now set him up as the world’s ultimate villain in their effort to redirect the frustration and anger of their own populations for their own totalitarian excesses at home. They have succeeded to a remarkable degree as western peoples now enthusiastically protest someone who has never done them any harm and obediently take part in the daily two-minute ritual of hate.

Happy at how things are turning out, the little totalitarian Trudeau now bravely urges Ukrainian men to pluck up their courage and run against the Russian tanks so they can be blown to pieces.

We, however, have a question for the Canadian Prime Minister: Where were you hiding, sir, when the peaceable truckers came to speak to you in Ottawa last month? Where were your heroics then?

Vasko Kohlmayer (email) was born and grew up in former communist Czechoslovakia. You can follow his writings by subscribing to his Substack newsletter ’Notes from the Twilight Zone’. He is the author of The West in Crisis: Civilizations and Their Death Drives.

Previous article by Vasko Kohlmayer: Beyond Propaganda and Brainwash: The True Causes of the Ukraine-Russia Conflict