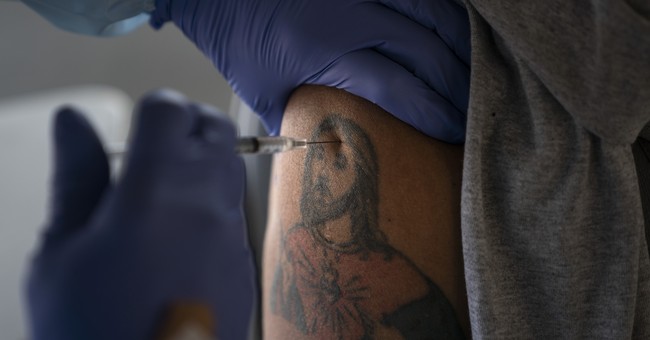 You already know this, guys. Yet, it’s refreshing to see writers on the Left call out the fake media narratives that are being produced to demonize the GOP and the unvaccinated, the latter group being a healthy mix of people of all political persuasions. The Delta variant isn’t more lethal, nor doesn’t it make you sicker. We have three vaccines—all are effective against the variant. Millions have been vaccinated. Some are more hesitant. That’s their choice, and to be frank—we shouldn’t blame them. First, it doesn’t solve the issue of lagging vaccination rates. Second, this was always going to be controversial as vaccinations, in general, are a topic that generates intense reactions. Third, it’s just laziness to hurl rage at people who have legitimate questions. Look at this montage of Anthony Fauci on masks…need I say more:
https://twitter.com/i/status/1420092482327621640
Ex-Rolling Stone reporter Matt Taibbi had a lengthy piece about how bashing the unvaccinated and the hysterics around this group from the media have represented the most absurd and abhorrent aspects of our modern political dialogue, among other things. He gets to how the snobbery and moral superiority complex that’s often associated with the Left is not trickling into the GOP camp, albeit the prawn sandwich wing of the party.

Now, Michael Tracey highlights that the vaccine hesitancy narrative is more complicated, and it’s being weaponized to justify a campaign of coercion and scolding against Americans still on the fence about the COVID vaccine [emphasis mine]:

When these naysayers and nit-pickers complain about the invented narrative that prominent Republican officials have only recently begun advocating vaccine uptake, what they seem to be really lamenting is that there hasn’t been enough sanctimonious, self-important hectoring — the kind they regularly engage in to showcase their claimed moral and political superiority. It’s apparently not enough for Republican-run governments to offer vaccines such that they’re universally available and free at the point of use, nor for Republican officials to encourage vaccination in normal language. It must all come with a side of browbeating, lest the Culture War not be waged for two seconds.

And while plenty of Republicans have done the “vaccine selfie” routine, there’s also something to be said for taking the vaccine without much fuss or spectacle, since most Americans are probably not inclined to broadcast their private medical procedures online. Showing off a needle in your arm on social media might not be the most effective persuasion strategy, especially for those who may otherwise have reservations about the vaccine. Plus, let’s face it: the whole “take a selfie with a needle being inserted into your arm” concept is a bit weird to begin with. Some may even call it creepy and invasive!

There’s also some conflation happening here. Because many Republicans, including those listed above, have been on the “sceptical” side of debates over secondary issues involving vaccines — including “passports,” mandates, and the like — these secondary policy disputes get lumped in with overall vaccine scepticism. Which definitely exists among Republicans to some degree — but certainly not as a function of Republican voters simply parroting the cues of Republican elected officials. The impression that Republicans are in aggregate a rogue band of vaccine denialists is what you might call a function of the “Marjorie Taylor Greene effect”: a phenomenon in which the most performatively wacky Republicans occupy an exaggerated role in the media’s imagination and consume an excessive amount of their attention. Yes, it’s true that Marjorie Taylor Greene has engaged in dim-witted vaccine-rejectionist talk. Is she a more influential Republican than… Donald Trump? Does she have more day-to-day control over vaccine distribution than literally every Republican Governor?

The fake “sudden Republican epiphany on vaccines” narrative seems to derive in part from the liberal desire to exercise permanent coercive control over their perceived cultural and political inferiors, using measures that were initially justified on the grounds of a public health emergency. There’s a point at which it becomes laughable to suggest that COVID is an “emergency” situation requiring intrusive state interventions; yet the executive order issued by Joe Biden on which his COVID “travel ban” policy is based still contains the language of “national emergency.”

Now, Tracey does feel that the authoritarian warnings about door-to-door vaccination protocols we all know Biden wants to enact are right-wing media hysteria. I disagree—nothing is more dangerous than the government acting upon emergency powers, but where we can agree is on who is vaccinated and who is not. He zeroes in on the fact that 40 percent of New York City public school employees are not vaccinated. He aptly notes these are people are who decidedly not conservative and are not reading like-minded media outlets. Anywhere elsewhere there’s an odd divergence between the media narrative and the facts on the ground? Yes.

West Feliciana Parish, Louisiana, which has the highest reported rate of adult vaccination in the state — 79% — and which voted for Trump in 2020 by a 62% to 37% margin. Nearby St. Helena Parish, won by Biden 54% to 44%, has an adult vaccination rate of just 24%. (For the nit-pickers who I’m sure will find a way to pedantically quibble with every jurisdiction-based comparison in this article, these two small Parishes have a roughly comparable population size — West Feliciana 15,568, St. Helena 10,132.)

There are countless other findings that could easily be dismissed as somehow “anecdotal” but nonetheless shed light on the limits of a partisanship-obsessed approach. In Collier County, Florida — won by Trump 67% to 32% — the age 65+ population is 86% vaccinated. It’s hard to imagine a more solid Trump demographic than 65+ residents of the Naples, FL area. The overall adult population is 64% vaccinated in Collier, which is a greater rate than some heavily Democratic counties in Florida, such as Leon County (Tallahassee) whose adult population is only 50% vaccinated, and which Biden won 64% to 35%. These are larger counties population-wise (Collier 384,902, Leon 293,582) and therefore presumably conducive to some sort of comparison.

In Chicago, 43 percent of residents are not vaccinated. Trump carried 24 percent of the vote in Cook County.

In the city of San Francisco, about a quarter of residents are not vaccinated. Trump carried about 12 percent of the vote in the city last year.

In Los Angeles County, just under 30 percent of residents are not vaccinated; Trump won 26.8 percent in 2020.

In Maricopa County, Arizona, which includes Phoenix, 52 percent of residents are not vaccinated; Trump won 48 percent of the vote there in 2020.

In Harris County, Texas, which includes Houston, about 48 percent are not vaccinated; Trump won 43 percent in that county in 2020.

In Philadelphia, Pa., about 37 percent of residents are unvaccinated. Trump won 17.9 percent of the vote there in 2020.

In Multnomah County, which includes Portland, Ore., just under 63 percent have at least one dose, meaning that 37 percent are unvaccinated. Trump won under 18 percent in that county in 2020.

In Milwaukee County in Wisconsin, 61.6 percent have at least one dose, meaning 38.4 percent are unvaccinated. Trump won 29.4 percent of the vote in 2020.

Detroit has vaccinated just under 40 percent of its residents; Trump carried 5 percent of the vote in that city.

He did note that hesitancy is more likely with Republicans, though a Kaiser poll found that 61 percent of the unvaccinated were not Trump lovers, Republicans, and didn’t vote for either party in 2020. Moreover, by May 11, healthy numbers, we’re talking 60+ percentage points or more, of those who were religious had at least one shot of the vaccine, which was tracked by liberal polling firm Data Progress.

There is nuance with most debates like this, folks. We’re a complicated country. The Trump coalition is one of the most durable and efficiently distributed in terms of political geography. It’s also one of the most diverse, which is something the media buries. I think a healthy number of Trump voters would entertain the idea of Medicare-for-All as a good chunk are already economically progressive. It’s the cultural issues, like immigration enforcement, that yanks them solidly in the Trump camp. COVID vaccine hesitancy is a bipartisan issue. The numbers don’t lie. Everyone has questions and can you blame them?

Instead of looking inward, however, the political class would rather denigrate and smear those with questions as country bumpkins despite liberals being some of the most vocal vaccine sceptics in the country. Remember the measles outbreak in Marin County, California. I highly doubt that’s Trump country.

We’ve gone from ‘follow the science’ to peddling science fiction to new mandates that are nakedly political. People see through it. They’re done. We have three vaccines. At this point, if people don’t want it, the experts and the political class are just going to have to deal with it. Just like I have to deal with the abhorrent truth that Ilhan Omar, Rashida Tlaib, AOC, and the rest of the squad are members of Congress. I hate it—but that’s the reality.