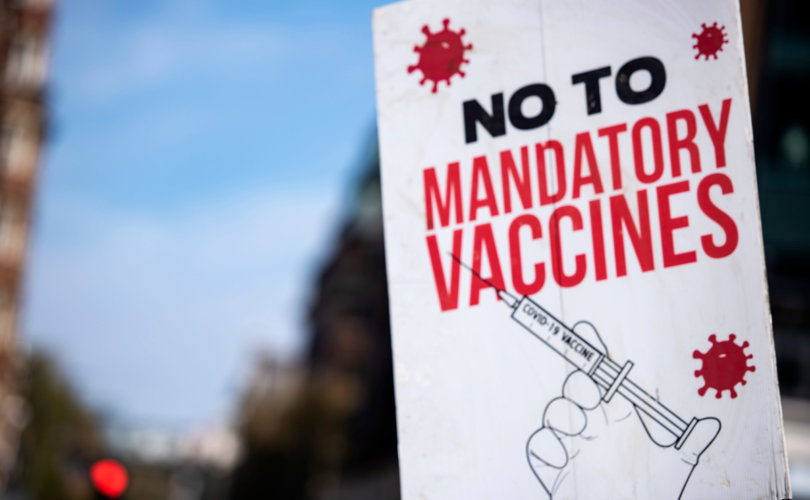 VANCOUVER, British Columbia (LifeSiteNews) – Thousands of people took to the streets in many cities across British Columbia (BC) last week to protest COVID vaccine passports and the mandatory vaccination of healthcare workers.

The September 1 protests were largest in the city of Vancouver. Rebel News reported that over 10,000 people attended them, blocking off sections along Cambie Street and 12th Avenue.

One attendee of the Vancouver rally told Rebel News that he “personally moved from Syria, a dictatorship country with very little freedom to come here, only to have my freedoms taken away from me. I became a Canadian citizen only last year, and I don’t understand any of this.”

A woman who had worked as a healthcare worker said she was “traumatised by her experience” of an understaffed healthcare system and quit her job as a result.

“I thought I was alone, and today I know I am not alone,” she said.

Vancouver Mayor Kennedy Stewart called the protestors “kooks” and a “bunch of jerks” who should “stay the hell home.”

Canadian Frontline Nurses also held rallies against jab mandates and vaccine passports on the same day as the Vancouver protests in all ten Canadian provinces.

BC will soon become the third province in Canada, following Manitoba and Quebec, with a local COVID-19 vaccine passport. It is to take effect on September 13.

Provincial governments across Canada have begun to reintroduce COVID-19 restrictions, blaming a fourth wave of the virus on the Delta variant and unvaccinated. BC Provincial health officer Dr Bonnie Henry said in late August that the recent uptick in cases and hospitalisations is due to a “pandemic of the unvaccinated.”

However, as is now widely known, people who have taken the experimental COVID-19 jabs can still contract and spread the disease. Coronavirus vaccine trials have never produced evidence that the vaccines stop infection or transmission. They do not even claim to reduce hospitalisation, but the measurement of success is in preventing severe symptoms of COVID-19 disease.

As COVID cases have surged in heavily vaccinated countries like Israel, the U.K. and the US, including among vaccinated individuals, hopes that vaccination would prevent infection or halt transmission have dwindled.

On April 30, in the wake of more than 10,000 reports of positive COVID cases among the fully vaccinated in the U.S., the Centres for Disease Control and Prevention (CDC) announced it would cease counting “breakthrough cases” unless the person is hospitalised or dies, leaving uncounted tens of thousands of vaccinated individuals transmitting the virus as though they were not infected.

By August, the failure of vaccines to prevent spread of the virus that causes COVID-19 was clear when CDC director Rochelle Walensky reversed the agency’s mask guidance and told vaccinated individuals to keep wearing face coverings.

“Our vaccines are working exceptionally well. They continue to work well with Delta with regard to severe illness and death,” Walensky told CNN. “But what they can’t do anymore is prevent transmission.”

Many BC businesses, including gyms, restaurants, landscaping companies, music schools, and even dog groomers, have banded together to say they will not ask for one’s COVID-19 jab status.

John Carpay, President of the Justice Centre for Constitutional Freedoms (JCCF), told LifeSiteNews that “hallway medicine” has been the norm in Canada for decades, and hospitals are overrun due to government failure.

“Regarding the health care system, Canadian hospitals have been overcrowded at various times for many decades, hence ‘hallway medicine’ is normal in this country,” said Carpay.

(NER: that’s treatment in hospital hallway’s due to overcrowding)

“Hospitals are overrun not because of COVID but by government failure since March of 2020 to increase health care capacity,” he continued.

“Governments have had 18 months to increase the capacity of the health care system and could have done so for a fraction of the cost that lockdowns have inflicted on people’s livelihoods, earnings, and prosperity. Trying to blame this on unvaccinated Canadians is a dishonest attempt to avoid responsibility.”

Health Canada has authorised four COVID-19 injections for adults and one for kids age 12 and up (Pfizer), all with connections to cells derived from aborted babies. Thousands of people worldwide have died or suffered other serious side effects after receiving experimental COVID-19 jabs.

The list of FDA-recognised adverse events has grown from severe anaphylactic reactions to include fatal thrombotic events, the inflammatory heart condition myocarditis, and neurologically disabling disease like Guillain Barré Syndrome. Meanwhile, the CDC reports a COVID-19 infection survival rate of greater than 99.95% for those under age 50.