NER: It was always said “There’s a fool born every minute” but we seem to have two generations of fools now. The incredible naïveté of the billions bowing to the vaccine god Moloch, and thinking they can trust Big Pharma, which has been crippling mankind a 1,000 ways since the days of Rockefeller. They are not your friends, you are a source of revenue that can be tapped and discarded. Wake up as its almost too late.

Midway through his recent interview with ABC’s George Stephanopoulos, Albert Boulra, the chief executive officer of Pfizer, said the following:

“We are very proud of what we have done… There is no other company that can claim to have done so much good to humanity as we have done.”

Bourla’s statement gives us a teaching moment par excellence, since his words are indicative of the mind-boggling levels of gaslighting that have taken hold in our society. 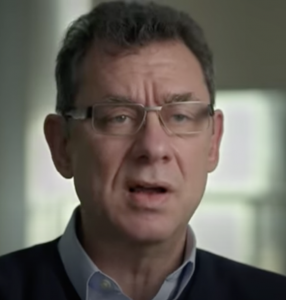 Let us look at the record and see what Pfizer has really done for humanity.

If you remember, it all began with great pomp when Pfizer triumphantly announced that its vaccine was 95 percent effective (see Pfizer’s November 2020 press release here). It was so good, Bourla and co. claimed, that emergency authorization for it should be immediately granted by governments around the world. In fact, its effectiveness was such, they said, that members of the Pfizer placebo trial group were asked to take the shot, which rendered meaningful evaluation of data virtually impossible.

Never mind that the trials were short and incomplete to an unprecedented degree.  Despite this, the frightened public accepted Pfizer’s claims – which were uncritically amplified by the collaborating corporate media – at face value and a vaccine frenzy ensued. Many people were so desperate to get these allegedly “life-saving” shots that they were willing to pay bribes to jump the vaccine line.

This mad rush to get injected by so many turned out to be a windfall for Pfizer. The company sold hundreds of millions of shots and posted record profits.

Soon, however, cracks began to appear in Pfizer’s narrative. It turned out that the “protection” afforded by its vaccine was rather short-lived. Studies showed that Pfizer-induced antibodies fade quite quickly. After six months, half of  those injected have none. Unashamed and undaunted, Pfizer came out with a booster. The coerced and gaslit public lined up to receive it in surprisingly high numbers, which in turn further pushed Pfizer’s already hefty profits into the stratosphere.

Unfortunately for the boostered, it appears that the antibodies induced by the third injection are no more long lasting than those generated by the original jabs. This is why there is already talk of the fourth injection! In Israel they may start giving it before the end of this year, which means that some people will have received four Pfizer shots in the space of some twelve months.

But here is the worst of it: not only have Pfizer-induced antibodies turned out to be very short-lived, but they also appear to be largely ineffective in dealing with the virus when encountered in the real world. To wit, a number of countries with high vaccination rates have experienced widespread outbreaks of Covid-19. Israel, a country that uses Pfizer almost exclusively, is a case in point. An early leader in the vaccination effort, it experienced the highest infection rate in the world. This is from a recent Bloomberg report:

“The country, once a front-runner in the global race to move on from Covid-19, became a pandemic hot spot in early September. Following the spread of the delta variant over the summer, Israel had the world’s highest per-capita infection rate in the week through Sept. 4, according to figures compiled by Johns Hopkins University.”

So, this is what inoculating most of your population with Pfizer vaccines gets you: the highest infection rate on the planet. And this by a considerable margin. At the time, Israel’s infection rate was fifty percent higher than that of the second most infected country, which was Mongolia.

Thanks, Mr. Bourla, for that.

So impotent were the vaccines in even slowing the spread of Covid-19 that in her August 15 interview with CNN, CDC director Rochelle Walensky made the following admission: “What they can’t do anymore is to prevent transmission.”

Not only do vaccines do nothing to stop the spread of Covid, they also do not appear to confer any special protection against its severe forms or death. In other words, vaccinated people are not only getting widely infected, they are also falling seriously ill and dying at high rates.

According to an August report by Becker’s Hospital Review, 60% of hospitalized Covid patients in Israel had received the full course of the Pfizer protocol.

In an interview on August 5 with Israel’s Chanel 13, Dr Kobi Haviv, medical director of Herzog Hospital in Jerusalem, said that the majority of coronavirus patients in his hospital were fully inoculated. According to Dr Haviv more than 90 percent of severe cases had received their vaccine.

So much for the completely fallacious claim that the vaccine protects against serious Covid. It does not and the data shows that clearly. This claim is another specious lie propagated by gaslighters like Albert Bourla who are saying things that are completely contrary to reality.

The situation appears to be no better regarding the boosters. The boosters, which were obviously designed to remedy the failure of the original shots, seem to be making things worse.

Below is a graphic based on data from John Hopkins University that shows a sharp rise in Covid deaths after the booster was introduced in Israel at the end of July. 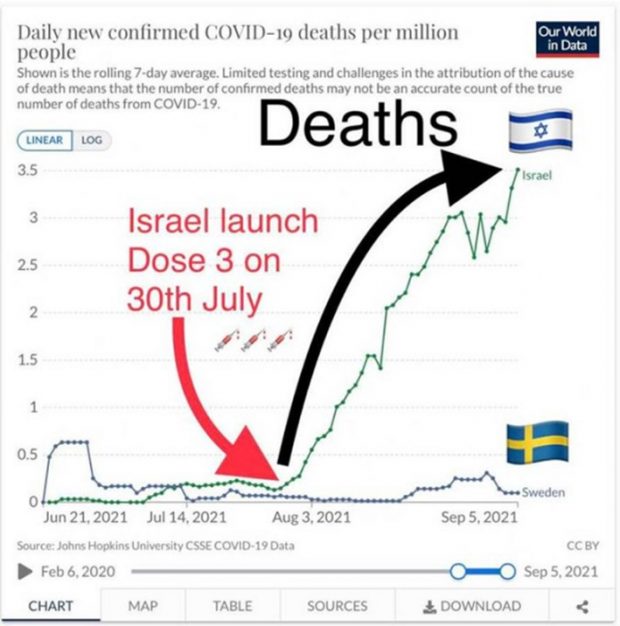 For comparison, the chart also features the death rate in Sweden, a country which did not administer boosters during this period. Its graph remained largely unchanged. (NER: Who would have thought the Swedes to be so much smarter than Israel, with perhaps highest IQ’s on the planet? But we know massive sums are being transferred by Big Pharma into government offshore bank accounts)

Here are undeniable, documentable facts regarding the Pfizer vaccine:

Not to be unfair to Pfizer, the facts regarding the other vaccines are very similar if not worse.

This is a massive vaccination debacle by any standard.

And we have not even mentioned serious injuries and deaths that have been caused by these vaccines.

According to a US government whistleblower, nearly fifty thousand people died in the United States within two weeks of receiving the vaccines.

Amazingly, those responsible for this debacle are making record profits.

More amazingly still, one of the main architects of this fiasco, Pfizer CEO Albert Bourla, has the audacity to claim that his company has done more for the good of mankind than any other company.

It is more than clear that Bourla and his fellow band of vaccinators are on a mission to gaslight the world. In the process they are making claims that run in complete contravention of reality and facts.

Other prominent gaslighters include the Head of the National Institute of Health Anthony Fauci and CDC director Rochelle Walensky, as well as a host of public health officials and government figures.

These people, in effect, say that black is white. They claim that ineffective and dangerous vaccines are a gift to humanity.

Many have fallen for it while the vaccinators are rejoicing on their way to the bank.

Sadly, the massive gaslighting campaign has been a considerable success. The failure of the vaccines stares us right in the face and yet most people are unable to see it.

If you are one of them, please try to think about these three questions:

What would we normally call vaccines that fail to prevent the spread of the targeted disease?

What would we normally call vaccines that do not stop serious Covid or death?

Would we not rightly call such pharmaceuticals a “failure”?

The word “failure,” however, is not often used in connection with the vaccines, at least not in government bulletins or mainstream media.

And what would you call those who have raked in unprecedented profits from these failed vaccines?

The words such as cheats and racketeers come to mind. And yet these terms are not applied either.

This situation is reflective of the gaslighters’ cunning and skill. Despite the havoc they have wrought, they are still in their jobs filling their pockets with millions (and in some cases with billions).

In a sane world they would be chased out of town. They would be removed from their positions and deprived of their ill-gotten gains.

But in the twilight zone we live these days, profiteers like Albert Bourla continue to grow enormously rich while most of the population is unable to grasp what is happening right before their eyes.

Vasko Kohlmayer (email) was born and grew up in former communist Czechoslovakia. He is the author of The West in Crisis: Civilizations and Their Death Drives. You can keep up to date with his writings by subscribing to his newsletter Notes from the ‘Twilight Zone’ on Substack.