Confluence Of Catastrophes: The Next Great Depression Could Be Just Months Away

Global warming, the pandemic, the war in Ukraine — these are all manufactured crises imposed on a docile public–a public instructed to trust the experts on any given topic because they themselves are far too stupid to apply their own logic.

And stupid the masses are. However, this stupidity is not organic. Society has been anesthetized from reason, intentionally. From today’s ‘gender wars’ and claims of ‘toxic masculinity’, to the old ‘left’ and ‘right’ dissensions, great wedges are being forced down the middle of us all, dividing and blinding us from the overwhelming number of ends and purposes that we as humans do actually share, such as respect and family, and the fight against centralized power/wealth.

Political beliefs should not define a person. This is a futile endeavor. The same puppet masters are pulling the strings whoever you vote for, and their modus operandi is the manufacture of catastrophes. A population in fear is far easier to wrangle than one given the time to stop and think, one allowed to awaken. People need to be distracted so as not to notice the strings, particularly when these strings become increasingly numerous and intrusive. Hence the growing number of ‘distractions’ in recent years, from Climate Change, COVID-19, to now the war in Europe. Each of these ‘catastrophes’ were/are easily preventable/avoidable/fixable, but easy fixes would be counterproductive to the end goal, because as well as being distractions, said catastrophes are also the key components and excuses used to forward the new regime. They are, in plain site, the blueprints of the new society: we need The Great Reset in order to fix our broken civilization, but little do the masses realize, civilization was dismantled on purpose. The intention of global warming was to bring about an energy crises; COVID’s purpose was the clawing back of our freedoms (and saw the roll-out of digital passports, curfews and lockdowns); and now the war, at least to my mind, will be the excuse given for the overall collapse of the financial system (which will include food shortages and rationing). And with regards to the latter –the crash– things appear to be playing out as planned. Looking to the markets, commodities are all firing higher and higher and higher. Wheat, for example, is about surpassed its all-time 2008 high:

While oil traded for $127+ a barrel earlier today:

With inflation already rampant, I see these soaring commodity prices as the final nail in the coffin for human prosperity and abundance. This Great Crash, that I’ve publicly been urging people to prepare for since 2018, may now be just months away from commencing. And I’m sure the majority of people aren’t ready for what’s coming. I myself am still months away from being fully prepared (off-grid in Central Portugal).

And although I see hyperinflation and the next Great Depression being just around the corner, what I see first is a panicked inflow into equities (and crypto): the parabolic finale that all markets experience before a collapse. And so it stands, if we start seeing the markets –such as the Dow Jones Industrial Average (DOW)– firing off into new record-breaking territory over the coming weeks then this will only confirm to me that the top is nearing. Looking to the past, the exact same phenomenon occurred prior to the 1929 crash. The below chart is of the DOW today (left) vs the index during the 1920’s build-up/crash/aftermath (right). Note the ‘choppy’ period we find ourselves in now, and note how it correlates with the choppy period that occurred just prior to the final pump that played out in 1929, before the price then crashed and lost 90% of its value: 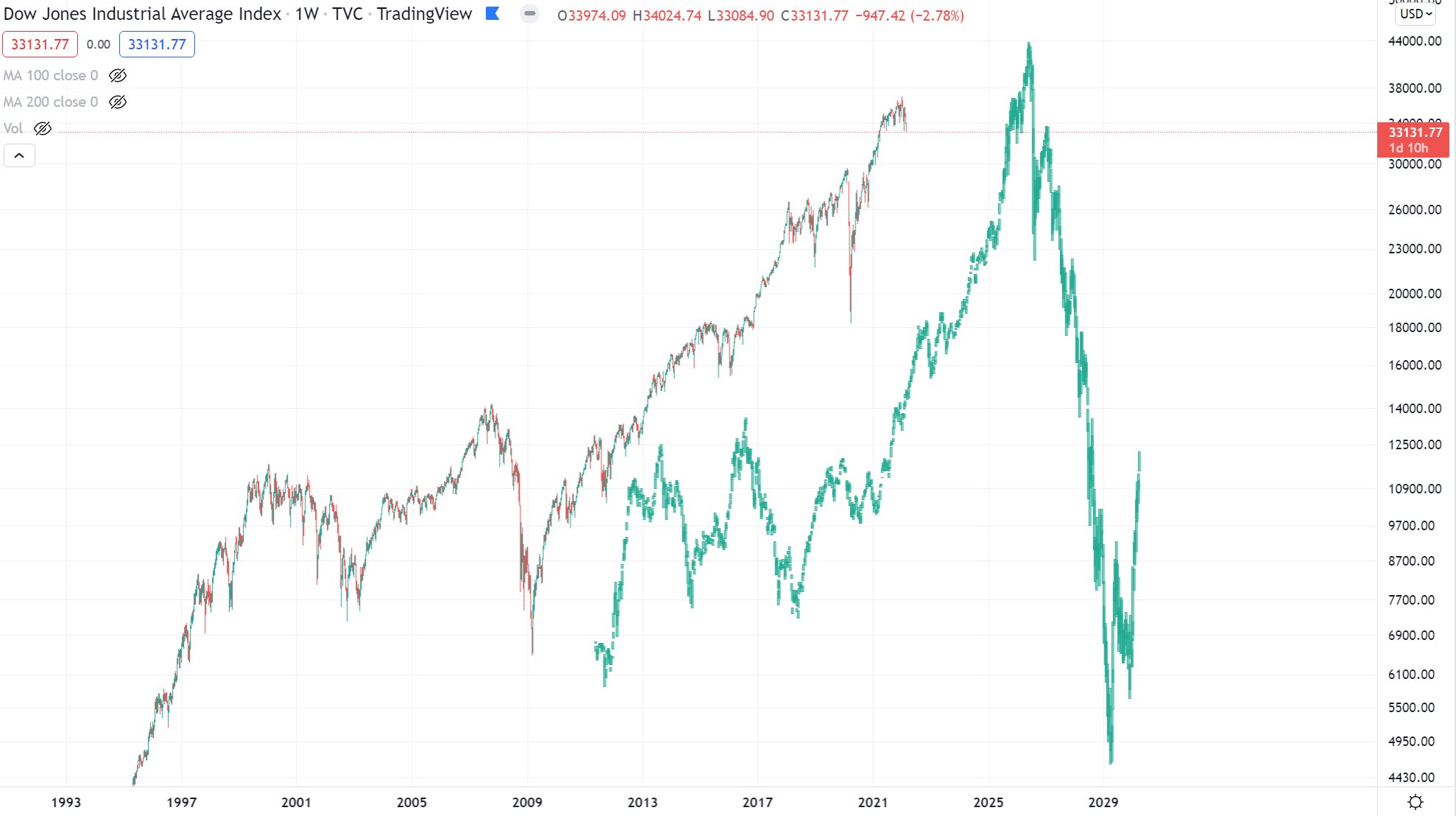 It may be hard to see a catalyst for this ‘final pump’ given how gloomy world events appear right now, but as I’ve hinted above, there is a heck of a lot of money sloshing about the system right now (thanks in no small part to the insane money printing of the past few years), and folk need to put it somewhere. It makes no sense to hold it in cash, given spiraling inflation, and so people will look to the markets–particularly given that they’re down 20% off their recent highs, making them appear more attractive.

And likewise with cryptocurrencies, a parabolic finale is likely on the cards (as they generally follow equities). My theories on cryptos have evolved over the past year-or-so. I’ve been convinced that this digital market was created by the very same PTB that are bringing us The Great Reset. Tellingly, big banks have been badmouthing crypto since its inception, but this has worked to convince many people that the digital asset must be a good thing: “If the banks hate it, it must be worth adopting”, goes the rationale of Bitcoin and Ethereum proponents.

But this is the exact same ploy the banks utilized when forming the Fed back in 1910. Public sentiment at the time called for a grip on a lawless banking system. And with their power threatened, the big banks helpfully offered to write a reform bill themselves. What they proposed was a body to regulate America’s finances — the Federal Reserve. Cunningly though, after drafting the bill these same banking families then went on a media campaign denouncing it as terrible for business, and an overall bad idea for America — and the masses, gullible as they are, fell for it hook, line, and sinker: “If the banks hate it, it must be worth adopting”. Just three years later, the Federal Reserve –disguised as a government agency even though in reality being nothing but a banking cartel– was successfully passed through congress (read Edward Griffin’s The Creature from Jekyll Island for more of deep dive on that).

Proponents of Bitcoin and Ethereum –the two most prominent crypto assets– think they are fighting the system when in reality they are seeing in the New World Order. I believe that immediately after this coming financial collapse, the new system will rise on the back of the blockchain. Supporting this contention, it turns out that JPMorgan (one of the original banks involved in forming the Federal Reserves) was behind Ethereum all along, from day dot. And while publicly denouncing the technology, it appears that the bank was funding its development behind the scene, since at least 2013: Ethereum is JPMorgan, JPMorgan is Ethereum. This is an absolute bombshell that I don’t think people, even those within crypto, are actually aware of. And to those proponents of crypto, I ask you this: Bitcoin was ‘appeared’ in 2009? Right? So immediately after the last financial crisis? Curious timing. And it is also said that its creator is unknown? Really? So we’re to believe that this crypto thawing in recent months, where big businesses, banks, and even nations are coming around to the idea of the asset, is happening even though nobody knows who owns it? You think countries are making Bitcoin legal tender without knowing if it could be hacked/have its plug pulled at any moment? I don’t think so. This is completely calculated. TPTB have worked a position in which it looks as if they have no other choice but to adopt the technology (that they secretly created in the first place!) because it’s now gained so much traction.

Like climate change, COVID, and the Ukrainian conflict, cryptocurrencies are likely just another cog of The Great Reset–a play within this complete reworking of society.

Within hours of Russia’s invasion of Ukraine, the international payment system ‘SWIFT’ was dominating the MSM headlines. The system is antiquated now, having been formed in the 1970s, and a new player is needed. Crypto is that new player, and, more specifically, at least by my reckoning, it will go by the name of Ripple (XRP), a company that for many years now has branded itself as an alternative to SWIFT. Ripple is currently being sued by the U.S. Securities and Exchange Commission (SEC) — a play that looks bad on the outside, but it also one, assuming Ripple wins –which it looks like its going to– that would actually provide complete clarify for the company and its token, clarity that no other body within the cryptocurrency space would have received to date, and which would then open the door to a host of new official use cases (such as the replacement of SWIFT). Furthermore, the SEC lawsuit may have also acted as a deterrent to retail investors, artificially holding the price of XRP back allowing the government to buy it up cheap. A similar thing has occurred with gold, too, both historically and today.

A digital, blockchain-backed financial system is the future. I have no doubt about that. Unfortunately, this spells more bad news for our freedoms. TPTB already know most-everything about each of us, but in the future if a person were to step even a tippy-toe out of line then the new system will be able to cut them off with just a click of a button. This will breed an even more compliant global population and will risk eradicating dissent, protests and free speech altogether. It could usher in the fall of humans as a species, and render us to the status of property: slave model complete.

I implore that you escape the system now before its imminent collapse and dark resurrection. Once the crash has commenced nothing will be attainable. Stocking up on food to avoid rationing won’t be possible; setting up a solar array and battery bank in order to disconnect yourself from a failing grid will prove impossible; and accessing survival resources at just the click of button likely won’t available any more. In other words, prepare now: The Next Great Depression Could Be Just Months Away.

And to back that notion up further still, both Fed employees and members of congress are now being instructed to sell their stocks. This instruction is under the guise of ‘ethical reasons’, so as not to cause panic, but in reality ‘they’ know what’s coming, and after being allowed to own stocks for the entirety of this multidecadal bull run, only now are they being ‘forced’ to sell, right at the top: