In the battle for the ‘Global South’, an ancient evil rears its head

By Dr. Mathew Maavak, a Malaysian expert on risk foresight and governance.

There has been much chatter of late about an alleged Russian-Chinese plot to take over an artificial geopolitical construct called the Global South. These allegations are consistently churned out, with increasing alarm, by the ruling class in the antipodal Global North.

Frantic headlines such as “Putin and Xi’s Bet on the Global South” (WSJ); “China and Russia’s Lies Are Winning Over the Global South” (Bloomberg); and “How Russia is trying to win over the global south” (The Economist) from the mainstream Western media have only served to reinforce this apparent planetary dichotomy. Politico declared that the “West must seize on the Global South’s state of unease,” presumably before the unwashed citizens of this bloc become enslaved in some Sino-Russian geopolitical gulag. If this isn’t a case of neoliberal racism pumped up on neo-colonial steroids, pray tell me what is?

Furthermore, as a geopolitical observer living in the so-called Global South, I am not aware of any such “unease” in Southeast Asia. If such anxieties do exist, it will be limited to an influential class who were insinuated into the levers of power by Western governments and their manifold agencies. My recent opinion piece on the British Commonwealth and its abiding neo-colonial machinations provide a backdrop to how this racket works.

Nearly all the grandiose treatises on this hemispheric divide are written by pundits from the Global North. Installed puppets in the Global South, who are congenitally incapable of original thought, merely exist to parrot these fantasies — conveyed through the subtle neo-colonial worldview of a Western-led Responsibility to Protect (R2P).

The plan seems to be easy: subject the world to a daily dose of alarmism until nations surrender their sovereignty to an emerging supranational order. The pervasive “coronapsychosis” we just witnessed is just a steppingstone towards this end. Sound policies that may ringfence nations during the current VUCA (volatility, uncertainty, complexity and ambiguity) era are routinely suppressed by “experts” from the Global North and their agitprop jesters down South. It is a lucrative plan. The global sustainable development sector is worth $20 trillion per year – representing nearly one third of the global GDP – and the South represents a green field that can be pillaged by profiteers from the North. Couched, of course, under the banner of humane philanthropy!

Take a look at the map of the Global North-South divide today. It is a stark reminder of a legacy divide between modern-era colonisers (i.e., from 1500 AD) and the colonised. Russia too was a colonising power right up to either 1917 or 1991 – depending on one’s historical bias – and was therefore placed within the Global North. Its actions since the breakup of the USSR however have not conformed to the rules of the new and improvised Great Game. Instead of spoliating its own citizens and the Global South, Moscow seems more concerned with NATO’s encroachment on its doorsteps. 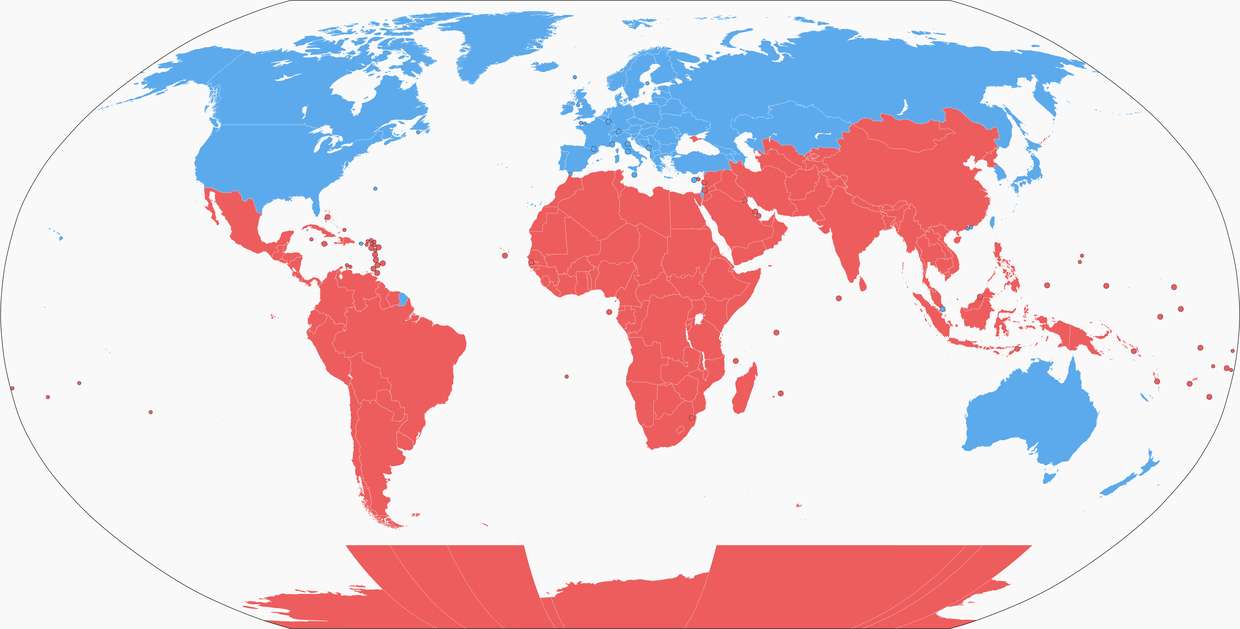 World map showing a traditional definition of the North–South divide (red countries in this map are grouped as “Global South”, blue countries as “Global North”). ©  Wikipedia

There are also a few geographic incongruities in the Global North construct as it includes nations such as Singapore, Australia, and New Zealand. This anomaly can – on rare occasions – lead to brief diplomatic flare-ups. The former prime minister of Singapore, Lee Kuan Yew, once warned that Australia could become the poor “white trash of Asia”, leaving Western pundits to conduct endless damage control exercises since the alleged outburst was recorded. It was Samuel P. Huntington who situated Lee’s polemic within the context of who gets to become the United States’ sheriff in Southeast Asia. (Relentless Australian police brutality, wrought by an incurably mass “coronapsychosis,” seems to have vindicated Lee).

Former US President George W. Bush settled matters over the choice of sheriff by picking Canberra in 2003. Around the same time, the Australian and New Zealand governments began accelerating an indigenized Morgenthau Plan (that was originally intended for post-WWII Germany) by systematically dismantling their manufacturing capabilities. If the reader needs a little shock here, consider the fact that there were millionaire enclaves, a mere 90-minute drive from Brisbane, that still lacked basic ADSL or fibre optic connections in 2017!

The Global North maintains a rigid pecking order that pre-empts any risk of technological challenges from its peripheries. To paraphrase Tolkien, there can only be one signet ring “to rule them all, one ring to find them, one ring to bring them all, and in the darkness bind them.”

That sums up the globalist plan but who wields that ring today?

Russian President Vladimir Putin coincidentally hinted at this darkness during a treaty signing ceremony over the incorporation of four new regions to Russia. Putin referenced the “dictatorship of the Western elites” which targeted “all societies,” including the “citizens of Western countries themselves.” This dictatorship entailed a “renunciation of traditional values” that amounted to “pure satanism.” He even quoted the Bible, specifically Matthew 7:16 which begins with “Ye shall know them by their fruits…”

But is there a biblical or historical basis to Putin’s tirade?

Fruits of a satanic tree?

Long before the North-South divide was dreamt up, there existed a real East-West bipolarity in the ancient global order. The East was primarily dominated by India and China, with both civilizations consistently cornering up to half of the global GDP until the late 1600s – the era of Western colonialism.

It isn’t unreasonable to treat Western colonialism as a revival of the ancient Roman empire. And for good reasons too. As Rome imposed its rule, its norms and its gods on conquered realms two millennia ago, its gold was however haemorrhaging to ancient India in exchange for spices, muslin and silk. It is quite telling that Roman learning, technology and military hardware hardly interested the Indians, only its gold. When Christianity and Judaism faced persecution in Rome, its adherents found refuge in the Indian subcontinent.

Faced with such recalcitrant centres of power, the seeds of a unified Western-led global order were sown, ultimately growing into a predatory colonial tree. European trade guilds began to don the cloak of mystery fraternities which promised enlightenment to its initiates. The Western nobility, which profited immensely from these guilds, ensured that their mystery mumbo-jumbo would co-exist with organised Catholicism.

The contradictions however were too great to be reconciled. Europe and its churches were eventually plunged into the Dark Ages. It only emerged out of a millennia of obscurantism when the German house of Schleswig-Holstein-Sonderburg-Glücksburg and the Saxon duchies began a new monarchical hierarchy in Europe. The Protestant Reformation acted as an irritant but not an impediment. The Saxon duchies later birthed the German house of Saxe-Coburg and Gotha which was conveniently renamed Windsor in the United Kingdom in 1917. The cuckolded genealogies of these dynasties are as legitimate as the mumbo-jumbo mysteries which bound them.

The Catholic-Protestant-Orthodox divides gradually mattered less and less to European monarchs who patronised their respective national churches. Casualties of religious wars were generally restricted to the rabble, much like today.

As colonialism, in particular Pax Britannica, reared its head, the concept of the global policeman was born. Giddy scientific rationalism also began to take root. Divinity, as defined by the Gospels, was viciously attacked. As Karl Marx declared: “My object in life is to dethrone God and destroy capitalism.”

Dmitry Trenin: Putin has proclaimed a new national idea for Russia as it abandons the dream of a Greater Europe

The offshoots of these contradictions continue to confuse, divide, and conquer societies. In the West, gender dysphoria has reached a point of no return. Men can supposedly give birth and breastfeed children. Children are incessantly subjected to Drag Queen shows in schools. Mentioning the colour white is like stepping onto a landmine. This new “science” – promoted by elitist Western institutions no less – should be called “wokology” for want of a better catch-all term.

Social divisions are festering worldwide at a pace that is unprecedented in history. The North-South divide is just a sideshow in the scheme of things. Relentless wealth fractionation is leading to a dystopian promise of “you’ll own nothing and you’ll be happy” by 2030. If this isn’t a contradiction of the highest magnitude, pray tell me what is? Besides, isn’t the total loss of ownership tantamount to slavery?

There are no historical precedents to the epoch we are entering. However, there is a biblical mention of an entity of poisonous fruits which Putin had referenced in his speech. In the book of Revelations, this entity is called “Mystery Babylon” and it deceives all nations through rapacious mercantilism, colonialism, slavery and deception. As well as “sorceries” which in the original Greek spells out as “pharmakeia.”

Now, does that sound familiar?

The statements, views and opinions expressed in this column are solely those of the author and do not necessarily represent those of RT.