Inequality and poverty will not be fixed by spending

They can only be addressed by growing more.
By Mike Schüssler 2 Jun 2021 If the debt trajectory doesn’t change, the government will find it won’t be able to tax more without fully destroying the already cracked golden egg. Image: Bloomberg

Did you know that the countries with the highest inequality in the world have a lot of seemingly unrelated economic indicators in common?

Many of the poorest countries with the lowest economic growth and highest unemployment and tax rates are in southern Africa. I believe the economic factors are related.

These economic indicators are not something mainstream commentators and leaders talk about either.

South Africa has kicked the spending and deficit can far down the road, but the road has come to an end.

The Covid-19 crisis has brought that end closer. The world became more unequal during the pandemic and nothing makes me think that will not be the case in emerging markets too.

Indicators that add to inequality and poverty for emerging markets

Firstly, all the countries with high inequality have a very high unemployment rate in common. All five Southern African Customs Union (SACU) countries are among the 10 states with the highest unemployment rates in the world. These countries find themselves within the top 12 most unequal societies too.

Brazil is also in both, and there is clear evidence across the world that high unemployment is a good indicator for high inequality. For example, Colombia, Malawi and Rwanda have double-digit unemployment rates like most of the other highly unequal countries.

A high tax-to-GDP ratio is another factor that many may not see as an inequality indicator, but it is clear that many emerging markets that have high tax burdens also have high levels of inequality. Again, all five SACU countries are in the top 30 highest taxed countries in the world.

Taxes collected as percentage of GDP for emerging markets, 2017 Ten of the highest-taxed emerging markets are also in the highest 15 unequal countries in the world.

One would think that with progressive income tax programmes that countries such as SA and Namibia would have lower levels of inequality, but this does not appear to be the case.

The reason becomes quite clear when one looks at the share that government wages takes out of the economy.

Namibia and SA lead the world in the burden of government wages.

Brazil, Eswatini, and Botswana are in the top government compensation countries too. The highest developed market, Sweden, has a lower wage bill than the average for the SACU countries.

Read:
Treasury puts the brakes on the wage bill (Feb 24)
No more funds available to be reprioritised for public sector wages (Mar 4)
All proposals will be considered at Friday’s public sector wage negotiations (Apr 23)

Companies need a level of returns that rewards the risk and pays more than the cost of capital. High tax burdens reduce the returns and often reduce the market size too. This leads to fewer new infrastructure and new employment opportunities.

It goes straight to the pocket of an elite – often a new elite, fewer in number but well-paid.

This reduces the money for government investment in economic infrastructure. With high tax rates, it also means that the private sector is less likely to make up the economic infrastructure shortfall unless it is well compensated. Thus, things like toll and private hospital fees are relatively expensive, resulting in the poor using these services less.

Ten of the 12 emerging markets with the highest wage bills for which we have recent data are also in the top 20 most unequal societies in the world.

This, combined with the high tax burden, means that most of the tax money goes to consumption expenditure and to a small group of citizens getting a large slice of the cake. Again, all SACU countries are in the top 10 and are joined by Brazil, while Zambia and Mozambique are also in the top 20.

In fact, for emerging countries, high government wage burdens are a very good indicator of inequality as more often than not civil servants who get the large chunk of GDP are in the top 5% or 10% of earners in those countries.

To illustrate this point, analysing tax data in SA shows that between 37% and 42% of the top 10% of earners are in the broader public service.

(This would include university, agency and all levels of government). So 20% of the formal workforce makes up double that number in the top 10% of earners.

Add the employees of some bigger state-owned entities (SOEs) and we have even more government-related employees in the top 10% of earners.

And with formal sector employees only representing less than 30% of all adults, it is clear that this also breeds inequality.

Furthermore, it means governments do not have much left to pay for medicine, books or roads.

Government wage bill as % of GDP for 2016 or later Government debt burdens and government interest payments relative to the size of the economy are also good indicators of stress in an economy.

The burden of government interest payments as a percentage of GDP in SA is the fourth highest of major emerging markets while the government deficit is also one of the highest. Brazil also has a high government deficit as do many Southern African Development Community (SADC) countries.

Government debt is not an obvious indicator of inequality but more of a leg iron for potential growth to close the poverty gaps and the ability of infrastructure to lift growth.

If there is little growth there will be no improvement in poverty and unemployment levels.

Many of the countries with very high inequality have high government debt-to-GDP levels, with the clear exception of Botswana. Interestingly the reverse also seems generally true in that lower debt-to-GDP countries have less inequality, as in the case of Eastern Europe, Turkey and Thailand – with India, and in a sense Argentina, the exceptions in the reverse angle. 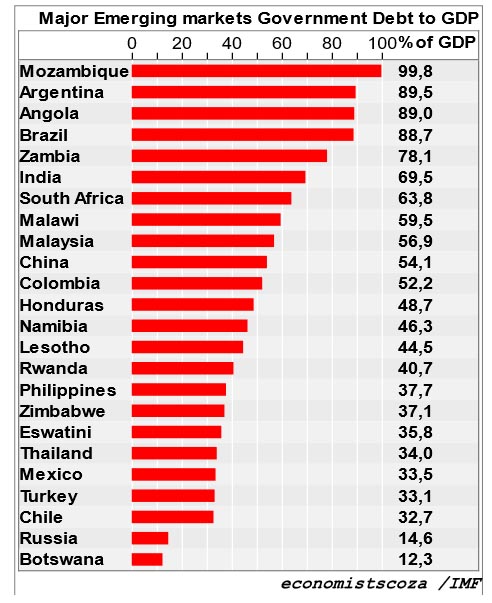 Note: All for general government except Angola, Namibia, Zambia Mozambique, Rwanda, Eswatini, Lesotho, Botswana, Honduras and Malawi, which are central government only

The problem is that some governments and many academics seem to believe that spending more will solve problems of inequality and poverty.

This is pertinently untrue for emerging markets at least, and for most economies. Even reserve currencies will implode at some stage with the debt burdens being imposed.

The real problem is not spending but fixing inefficiencies and crime

SA and southern Africa have generally failed to fix government inefficiencies or badly run SOEs and government functions such as public transport. Instead, corruption has engulfed every facet of life in government and the destruction just continues.

It is downhill from here as the kitty has now run dry. With deficits of over 14% this year and nearly 10% next year it is silly to think government debt will remain below the level of the country’s GDP.

A startling 52% of this year’s non-interest expenditure is financed by debt. That is not even close to sustainable. Over 40% is normally a clear sign of a debt or hyperinflation crisis.

With an extreme tax burden that is crushing growth potential while spending is mostly on consumption by the government, and with our presidency relying on a predominate government and SOE-based trade union federation, it seems unlikely that the country will be able to run a sustainable spending and tax regime.

The hard-left trade-union-inspired government spending and taxation will not be going away easily.

But as debt levels rise to closer to 100% of GDP the room to do things will be crushed. The government will not be able to tax more in a very weak economy without fully destroying the already cracked golden egg.

So far SA has been buying time to avoid this, but with ever louder voices crying for higher wages within SOEs and the public sector, this will be closely watched. It is also a major financial market predictor now, I believe. Investors and traders have woken up to the fact that public wages are just too high in SA and in other SADC countries. (An analyst recently pointed out the mess in Mozambique, saying they pay for an army but got long-distance runners instead).

In short, it’s over if we don’t make massive reforms

If we do not make massive reforms, I can tell you that universities will close, passenger rail agency Prasa and the Gautrain will no longer be around, social grants will become worthless, and hospitals will be empty places that employ doctors who can prescribe but not provide medicine.

Inequality and poverty will rise even more. Unemployment will rush higher too.

So government, if it spends more, will at some stage have to tax more – and that will chase away even more potential employers or future employers, which will increase unemployment and create even more pressure for the government to employ more civil servants and raise taxes yet again, while cutting books, medicine and infrastructure spending.

This is a bad cycle and the shouting for a universal basic income grant will threaten those who are currently employed with even more taxes and the richer folk with wealth taxes.

High company tax burdens along with red tape will prohibit more firms and potential employers. Unemployment and poverty will increase.

We are getting closer to this very bad scenario where the country will take crushing measures like changing pension regulations, begging from the International Monetary Fund, or hitting the rich with ever-higher taxes chasing even more job creators away.

I am not a pessimist by any means, but we honestly need to pray that the finance minister can get it right this time as the data mentioned above will kill growth and hope in this economy.

If SA just spends and spends, then many will leave and rather work elsewhere. They do not deserve the burden they will carry for enriching the few at the expense of the many.

We are already seeing ever more young people with an education leave our shores.