up to 52 times more likely to die follo 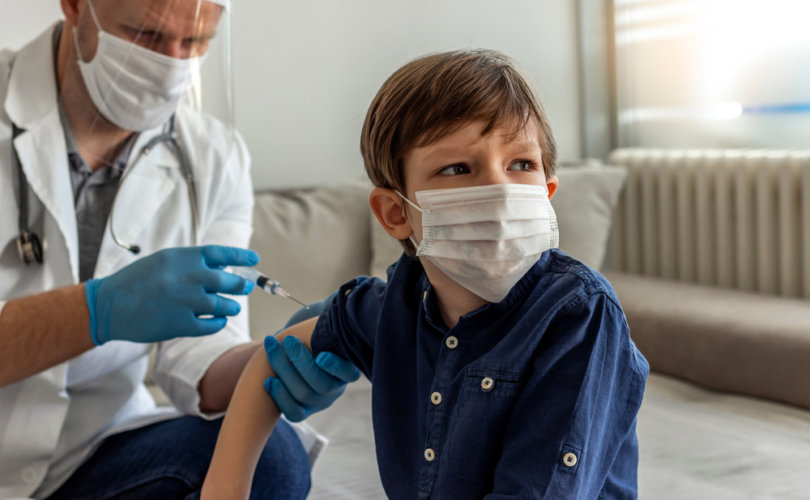 LONDON (LifeSiteNews) – Britain’s Office for National Statistics (ONS) has released data indicating that children who received the COVID-19 jabs have suffered a death rate 54 times greater than that of their un-jabbed counterparts.

In December, the ONS published age-standardized data on the mortality rates of individuals in 5-year age sets in Britain, grouped by their “vaccination” status for the COVID-19 shots. The data accounts for the period from January 1 to October 31, 2021.

The ONS tabulated “Monthly age-standardised mortality rates by age-group and vaccination status for deaths involving COVID-19, per 100,000 person-years” but presented the data only for ages 18 and over. However, the jabs are available to children as young as 12, and those children are allowed to receive the shot against their parents’ wishes. In limited cases, children as young as 5 have been given a reduced dosage of the shots.

Nevertheless, as noted by The Exposé, a separate table outlining “deaths and person-years by vaccination status” includes 5-year age groups from 10-years-old and up. From the data provided, a calculation of the mortality rate per 100,000 person-years can be made.

The rate per 100,000 person-years delineation is used in preference over the simpler 100,000 population calculation to better represent the mortality rates over a specific period of time, as people in one “vaccination” group – such as un-jabbed, single-jabbed, and double-jabbed – soon move into the next group.

Table 9 of the ONS report shows the “deaths and person-years by vaccination status and five-year age group” for the entire ten-month period. According to the report, the un-jabbed 10–14-year-old group represents 2,094,711 person-years, and the 15–19 age set 1,587,072 person-years over the same time.

The data show a stark increase in deaths among children both single- and double-jabbed compared to their un-jabbed counterparts. For children aged 15–19, the risk of death increases by almost double if they take the first shot and by over three times if they take the second.

On average, it means that children between 10 and 19 years of age who had received at least one shot of the COVID jabs had a 3.7 times greater chance of dying between January and October last year.

Additionally, according to the ONS’ “five-year average weekly deaths by sex and age group” figures between 2015 and 2019 among children ages 10-14, recorded deaths have risen by 44 percent above the average in weekly figures provided by the ONS for 2021.

The JCVI, an independent adviser to the U.K. government on immunization programs, determined in a September 3 statement that the “available evidence indicates that the individual health benefits from COVID-19 vaccination are small in those aged 12 to 15 years.” They added that any benefit granted by the shots is only “marginally greater than the potential known harms,” while acknowledging that “there is considerable uncertainty regarding the magnitude of the potential harms.”

Given the uncertainty of risks involved with the COVID shots, the JCVI considered the benefits “too small to support advice on a universal programme of vaccination of otherwise healthy 12- to 15-year-old children at this time.”

Moreover, COVID shot trials have never produced evidence that the vaccines stop infection or transmission. They do not even claim to reduce hospitalization, but the measurement of success is in preventing severe symptoms of COVID-19 disease. Indeed, there is strong evidence that the “vaccinated” are just as likely to carry and transmit the virus as the unvaccinated.

Many Catholics and other Christians have rejected the currently available COVID inoculations because they were developed or tested using cell lines derived from aborted children.